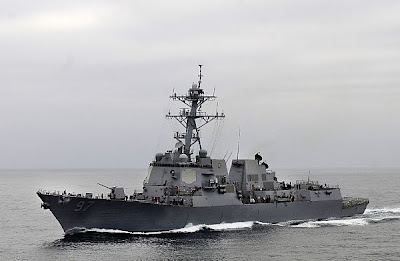 From Combined Maritime Forces Public Affairs USS HALSEY, At Sea (NNS) -- USS Halsey (DDG 97) responded to a call of distress from M/V Albrouj, a Yemeni dhow that was en route to Somalia from Yemen, while the U.S. ship was conducting helicopter operations in the Gulf of Aden, Jan. 19.

The guided-missile destroyer Halsey, which was two hours away from the position of the dhow, immediately responded to the distress call. The Helicopter Anti-Submarine Squadron Light (HSL) 49 air crew quickly relayed the vessel's position to Halsey. The ship responded quickly. Upon arriving on the scene, the ship launched two rigid hull inflatable boats (RHIB's) to provide assistance. Two electricians from Halsey conducted an investigation along with Albrouj's boat engineer, and discovered a faulty alternator and four dead batteries. The ship provided the dhow with two batteries to allow the crew to safely continue their voyage to Somalia.

"We quickly realized that the problem lay with the alternator and that the batteries were being drained extremely fast," said Electrician's Mate 2nd Class (SW) Clinton D. Easley, one of the Halsey electricians who boarded the Yemen dhow. "By providing them with a couple of spare batteries that we had onboard, the problem was solved and the dhow was quickly on its way."

"All mariners who sail the oceans should respond quickly to a fellow mariner's distress call. The sea can be an unforgiving place, when your vessel is adrift and without power," said Commodore Aage Buur Jensen from Commander Combined Task Force (CTF) 151. "I'm very pleased with the swift assistance that USS Halsey rendered on this occasion."

Halsey has recently assumed the role of flagship to Commodore Aage Buur Jensen, Royal Danish navy and his multinational CTF-151 command staff. CTF-151 transferred command from the Pakistani navy who were stationed aboard the USS Kidd (DDG 100).

CTF-151 is one of three task forces assigned to combined maritime forces. Established in February 2002, the Task Force's key mission is to conduct counter-piracy operations in the Red Sea, Gulf of Aden, Somali Basin, Arabian Sea and Indian Ocean. It protects and defends the legitimate use of the ocean by fisherman and merchants, and stands ready to assist any mariner in distress...