Iran thanks US Navy for "positive humanitarian gesture

Last Friday, I reported on War On Terror News that the US Navy had rescued Iranian fishermen being held hostage by pirates. Go here for the details. 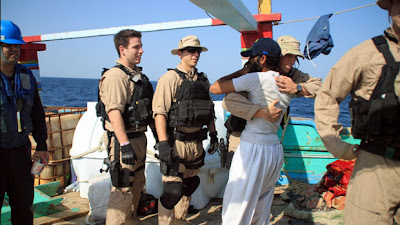 An Iranian fisherman embraces a U.S. sailor on Thursday, following a mission in which members of the U.S. Navy rescued Iranian crew members whose fishing dhow was seized by suspected Somali pirates. (U.S. Navy handout)

On Saturday came word that the Iranian government is thanking the US Navy for that rescue. Read on:

U.S. officials announced Friday that the fishermen had been rescued by a U.S. Navy destroyer on Thursday, more than 40 days after their boat was commandeered by suspected Somali pirates in the northern Arabian Sea. The rescue came just days after Tehran warned the U.S. to keep the same group of warships out of the Persian Gulf in a reflection of Iran's fear that American warships could try to enforce an embargo against Iranian oil exports.

"The rescue of Iranian sailors by American forces is considered a humanitarian gesture and we welcome this behaviour," Foreign Ministry spokesman Ramin Mehmanparast was quoted as saying by state TV's Al-Alam Arabic channel....

The CBC has more here.

I am sure the Iranian government DOES welcome 'this kind of behaviour'!!! Good job the US Navy was in the right place at the right time. Just sayin'...