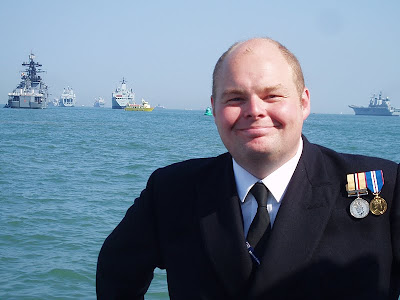 A Royal Naval Reservist and Staff Officer at the UK Hydrographic Office (UKHO) has been honoured as a Member of the Order of the British Empire (MBE) for his role in the anti-piracy mission off Somalia.

Chris Parry, an AWNIS (Allied Worldwide Navigation Information System) Staff Officer at the UKHO in Taunton and Lieutenant Commander at HMS Flying Fox in Bristol, is currently leading a team at the UKHO which works closely with the Royal Naval Reserve to deliver safety and security information to merchant ships and warships involved in or transiting through operational areas.

"It has been a real challenge to make sure that all elements of the maritime infrastructure are joined up. This means that ships get navigation warnings alerting them to pirate activity, and that the charts and publications that they use provide consistent advice on what routes to take, who to report to, self-protective measures, and what to do when attacked."

This work has involved many firsts for Lt Cdr Parry and the team, not least the creation of a new type of chart specifically for the piracy problem off Somalia and engaging with many overseas organisations to make sure merchant ships stay safe.

The aim of AWNIS is to collate, co-ordinate and communicate navigational safety and security information to merchant shipping and military authorities within an operational area. Wherever the military interacts with the maritime environment there is a requirement for AWNIS.

Currently members of the Royal Naval Reserve AWNIS specialisation are mobilised as part of the UK Maritime Trade Organisation in Dubai, EU Naval Force Headquarters (Northwood), UK naval operations across the globe, and until recently supporting operations off Libya from Naples.

As a reservist since 1994, Lt Cdr Parry was mobilised to Iraq in 2003 as part of the invasion and, over the last three years, together with his AWNIS team, has been deployed to support operations off Libya and Somalia. The latter has involved working closely with the EU, NATO and UK forces off Somalia to deliver safety advice to merchant ships which are transiting through the piracy high risk area.

"This is a well-deserved and fitting public recognition of his excellent work and that of the AWNIS team on anti-piracy support to all mariners and their contribution to operations off the North African littoral."

In 2008, Lt Cdr Parry was presented with a Lord Lieutenant's Certificate for Meritorious Service in the Royal Naval Reserve. This award recognises those amongst the Reserve Forces and cadet community whose performance in service is exceptional.

On being awarded the MBE he said:

"This is a great honour, especially as what we do is only a small part of the work which goes into the international anti-piracy effort."