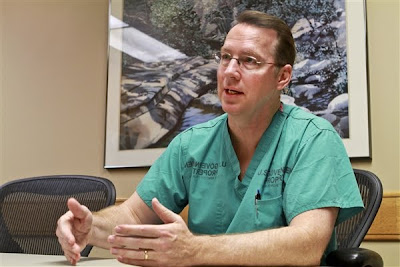 After more than a decade of research and testing, the cancer vaccine, dubbed E-75, soon will move on to its final phase of testing to earn Food and Drug Administration approval, said Army Col. (Dr.) George E. Peoples, director and principal investigator for the Cancer Vaccine Development Program at San Antonio Military Medical Center here.

The team has high hopes for this vaccine and its lifesaving potential for breast cancer survivors, particularly since breast cancer is the most prevalent type of cancer seen among military beneficiaries in the hospital here, said Peoples, who also serves as the deputy director of the U.S. Military Cancer Institute and the medical center’s chief of surgical oncology.

“We’ve made a commitment to take care of active-duty personnel, spouses and retirees,” the colonel said. “And cancer is a notable problem among beneficiaries.”

The cancer vaccine concept has been around for a long time, Peoples noted, but the team here has adopted a different approach to test their effectiveness. The vast majority of vaccines in the past were tested on end-stage cancer patients, he explained. However, a vaccine is meant to stimulate the immune system, and a healthy immune system isn’t typically seen in someone in the last stages of cancer.

As a result, “a lot of early cancer vaccines tested … in end-stage patients were found not to be helpful,” Peoples said. “No real surprise there.”

To more appropriately gauge the vaccine’s effectiveness, Peoples’ team decided to test it among patients who have a healthy immune system -- cancer survivors who are disease-free but at risk for recurrence. Experts can predict recurrence based on several factors including family history, age, size of tumor and the presence of involved lymph nodes, among other indicators.

The researchers targeted the HER2/neu protein, which is expressed at varying levels in women with breast cancer, then honed in on the 60 percent of women who express the protein at low to intermediate levels. The vaccine is a mix of the E-75 peptide of the HER2 protein and an immune system stimulant.

They started with a 200-patient trial in 2001 and followed each woman for five years. Half of the women received the vaccine -- one injection a month for six months -- and the other half was the control group.

This success led to the next phase of testing, the colonel said, which will begin early this year and involve 700 to 1,000 patients.

Unlike the earlier phases, however, this step will be undertaken by a commercial company, Galena Biopharma, which has the resources and manpower to undertake such a large-scale test. The company will seek FDA approval and, if received, release the vaccine for public use.

This phase will take about five years to complete -- two years to enroll, then a three-year observation period, Peoples said.
“The end point is the recurrence rate after three years,” he explained.

Meanwhile, Peoples and his team will turn their attention to a multitude of other projects, many based on the same concept that made the E-75 vaccine so successful -- using the body’s own immune system to destroy cancer cells.

They’ve already taken the same vaccine and completed a trial with prostate cancer survivors. As with ovarian and lung cancer, prostate cancer also expresses the HER2 protein.

Peoples said he’s also intrigued by a successful trial they conducted on breast cancer survivors who express the HER2 protein at the highest levels, rather than the low to intermediate levels they focused on before. In this study, they combined their vaccine with the drug Herceptin.

They conducted a small trial with 60 women, Peoples said, and when they administered the vaccine and Herceptin together, the recurrence rate dropped to zero. “The preliminary data is very exciting,” he said. “But we need to wait and do larger trials.”

Word has spread of the cancer vaccine program’s successes and intriguing results. Military and civilian experts have approached Peoples wanting to take part in research that has such a potentially widespread impact. The idea of active, specific immunotherapy -- engaging the body’s immune system to do the work of fighting the cancer -- is an exciting and rapidly evolving area, Peoples explained.

Garnering this interest, Peoples has steadily built a worldwide network of military and civilian hospitals that can assist with clinical trials and research. The network includes just about every major military hospital alongside a civilian hospital in cities across the nation and overseas.

The partnership has reached Athens, Greece, and is about to extend into Malaysia. “We’re about to circle the globe,” he said.

Peoples attributed much of the program’s successes to this military-civilian network. “We’re very fortunate to have great partners,” he said.

He also praised the military men and women willing to take part in the trials. They enter into them knowing they may be part of the control group that doesn’t receive a potentially lifesaving vaccine. Despite that fact, he hasn’t seen a shortage of willing participants, Peoples said.

“The military is an ideal setting for clinical trials,” he said.
Service members, retirees and family members have a strong sense of service, he noted. “They want to be involved and contribute to the research,” he added.

“Hopefully, sometime in my lifetime we’ll figure that out,” he said.

Email ThisBlogThis!Share to TwitterShare to FacebookShare to Pinterest
Labels: Breast Cancer and US Military