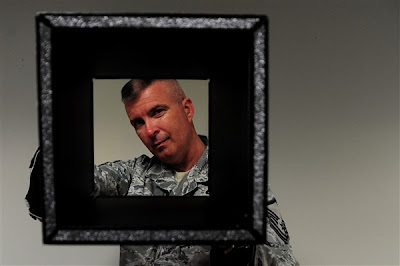 "I will make this dove disappear!" the tall, silver-haired Woods said confidently to a group of children who gathered here recently to watch Woods -- aka, Perry Don the Magician -- demonstrate his magic during his off-duty time.

Woods carefully placed a white bird into a mysterious black box and covered it with a cloth. He then removed the cloth and -- poof! -- the dove had vanished, to the collective gasps of the children.

Woods, the 437th Airlift Wing programs manager here, is a 22-year Air Force veteran. In his spare time, he volunteers by performing magic to underprivileged and disabled children.

On stage, “Perry Don’s” large black suitcase is full of animals and props to enhance his show. He has perfected his magic act since he was about 9 years old.

"I thought magic was something spectacular to see," Woods said. "At the same time, I was fascinated with what made it happen. I was interested, but there were very few avenues to explore the area of magic."

Woods, 43, first explored his fascination with magic by visiting local magic shops in his hometown of Kissimmee, Fla. He saved what little money he had to learn the basics of being a magician.

As a teenager, however, Woods started to give up his childhood dream. "I didn't have anybody to associate myself with," Woods said. "When I was a teenager, nobody I knew was interested in magic."

Growing up with little money or support, Woods became discouraged with his early ambitions. "Pursuing magic was my dream," he said. "However, I was ready to become my own man."

Woods "became his own man" when he walked out of the magic shop and into a military recruiting office. He enlisted at age 21, and didn't perform magic again for seven years.

"My first show after becoming an airman was in Alaska," Woods explained. "It was a children's birthday party and didn't go very well."

Despite that first rocky performance, the party let Woods experience magic again. From that moment on, he didn't look back.

Woods became a noncommissioned officer who taught courses to airmen, fresh from basic training, at Shepherd Air Force Base, Texas. For the next four years, he incorporated magic tricks into his lectures, which he said “sparked a deep interest and grabbed the students’ attention.

"The students never knew what I would do next," he added. "Objects might appear to be moving across the table or levitating in the air. They didn't know what to think or expect.”

Woods' students often had some of the best scores in the school -- a fact he attributes to his magic in the classroom, and something he was glad to do.

"The Air Force has given me a lot of opportunities," Woods said. "Being able to use my magic to educate young airmen was my way of giving back to it."

After arriving here, Woods continued using his magic skills to give back to the community. For the last three years, he has performed for the hospice organization, Shannon's Hope, a therapeutic camp for children dealing with the death of a loved one.

"Some years, Shannon's Hope has a large audience," he said. "However, other years I'll perform shows to smaller audiences. You never know, but it's always an honor, no matter what size the audience may be, to assist in providing stepping stones for the children's stumbling blocks."

Woods continues to develop his skills by working with other magicians and performing in the local community. He doesn’t mind that he invests much of his own money to hone his craft.

"I don't do magic for the money," Woods said. "I do magic simply for the smiles on people's faces. Those smiles are the real magic."

Email ThisBlogThis!Share to TwitterShare to FacebookShare to Pinterest
Labels: Every Day Hero