Britain's Watchkeeper in the skies over AFG 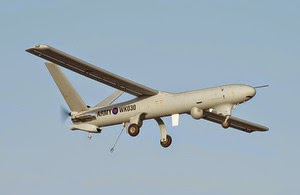 
This new capability is providing force protection for British troops as they prepare to draw down from Afghanistan by the end of this year.
Watchkeeper can carry out surveillance tasks and gains situational awareness via its cutting-edge cameras and radar capability.
[...]
Mr Fallon said:
Watchkeeper is the first unmanned air system developed and built in the UK to become operational and will be a significant surveillance and reconnaissance capability for the Army for years to come. There is no doubt that it will prove to be a battle-winning technology.
General Houghton said:
The enhanced real-time situational awareness Watchkeeper provides means that our local understanding is greater, our tactical decisions better informed, and that, ultimately, personnel on the ground are safer.
Watchkeeper pilot and payload operator, Sergeant Alex Buchanan, said:
It’s been a real privilege to be the first to fly the Army’s new Watchkeeper remotely-piloted air system on operations. It’s an amazing capability and has already provided important information to troops, enhancing the safety of everyone that lives and works at Bastion....

Email ThisBlogThis!Share to TwitterShare to FacebookShare to Pinterest
Labels: Watchkeeper