The announcement was made in Winnipeg in honour of the fact that the soldiers were with the Winnipeg Grenadiers when they died in the Somme region of France following the first attack of the Battle of Amiens in August 1918.

The DND and the CAF are working with the Commonwealth War Graves Commission and in consultation with the soldiers’ relatives to plan for an internment ceremony to provide the soldiers with a final honoured and appropriate resting place.
[...]

“The identification of these First World War soldiers is a meaningful demonstration that the sacrifice they made for Canada will not be forgotten. In remembering these fallen soldiers who served such a valuable role in our history and in our wartime commitment, we reflect upon both the freedom they fought to preserve, and our appreciation for the present day sailors, soldiers, airmen and airwomen who are continuing this proud tradition.”
The Honourable Rob NicholsonMinister of National Defence
“It is fitting that during the centenary of the First World War, we have the opportunity to afford these young soldiers the honour and respect owed to their sacrifice. The years of diligent research and scientific efforts undertaken to recognise our fallen represent the legacy of admiration and regard due to these soldiers, and our responsibility to provide them with the dignity they deserve.”
James BezanParliamentary Secretary to the Minister of National Defence“We will never forget the sacrifice of those who came before us. As we commemorate the 100th anniversary of the First World War, it is extremely poignant to both reflect on this century of history and be able to identify and lay to rest these soldiers who gave the ultimate sacrifice for our freedom.”
Lieutenant-General Marquis HainseCommander Canadian Army

Much more on the efforts to bring all our Fallen Heroes home here. 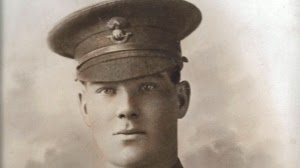 Clifford Neelands, Lachlan McKinnon, William Simms and John Lindell died in the Battle of Amiens in 1918

Nearly a century after they died in battle, the remains of unidentified Canadian soldiers who fought in the First World War are still being found in Europe.


Today the Department of National Defence released the names of four who died during the Battle of Amiens in August 1918.


Their resting place was discovered in 2006 by then 14-year-old Fabien Demeusere, while digging in his back garden in Hallu, France, 120 kilometres north of Paris.


Demeusere, a young First World War history buff, whose home was built on what had been a battlefield in 1918, had made an important discovery.


The remains of eight soldiers were eventually found, but so far only four have been identified.

Neelands was born in Barrie, Ont., and moved with his family to Winnipeg. He worked as a real estate agent before joining the 78th Battalion. Lt. Neelands was one of six officers in the 78th who died in the Battle of Amiens.


McKinnon grew up in Scotland, arriving in Canada in 1913. He had worked as a butcher. After he enlisted, he was back in the U.K. by 1915. Before going to fight on the continent, he married a woman from Glasgow. Pte. McKinnon was seriously wounded in his left leg while serving as a rifleman on the Somme front in 1916.

Simms was from a large farm family in Russell, Man. Pte. Simms took part in all the major Canadian offensives of 1917. One of his brothers also died in the war.


Lindell was born in Sweden in 1884, came to Canada when he was about 20 and ended up in Winnipeg. Lance Sgt. Lindell worked as a railroad foreman before he joined the 78th battalion in 1915....