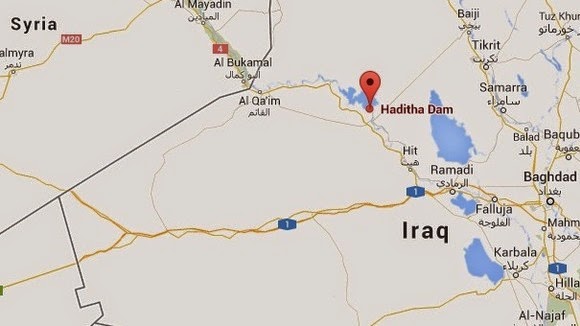 "At the request of the Government of Iraq, the U.S. military on Saturday conducted coordinated airstrikes against Islamic State of Iraq and the Levant (ISIL) terrorists in the vicinity of the Haditha Dam in Anbar province. We conducted these strikes to prevent terrorists from further threatening the security of the dam, which remains under control of Iraqi Security Forces, with support from Sunni tribes.

"The strikes were flown by aircraft under the control of U.S. Central Command. The strikes were conducted under authority to protect U.S. personnel and facilities, support humanitarian efforts, and support Iraqi forces that are acting in furtherance of these objectives.

"We will continue to conduct operations as needed in support of the Iraqi Security Forces and the Sunni tribes, working with those forces securing Haditha Dam.

"Sitting astride the Euphrates River, the Haditha Dam provides fresh water for millions of Iraqis, as well as their crops. It is the second largest hydroelectric contributor in the power system in Iraq.

"The potential loss of control of the dam or a catastrophic failure of the dam - and the flooding that might result - would have threatened U.S. personnel and facilities in and around Baghdad, as well as thousands of Iraqi citizens."