UPDATE: Your important Mission: Shine a porch light for a Fallen Hero

Found this from Darren's mom on the FaceBook page:

So I just made Darren go to bed because if it was up to him he would stay up all night looking at the post that everyone is posting. I however need to share this moment with everyone. Since my husband has been killed Darren has not been to church but a few times because he is still upset about it and I choose as a mother to let him join on his own terms rather then forcing him and taking the chance of losing his faith forever. So with that being said since this remembrance porch light has started and going around for the first time in about 1 year tonight Darren ask as I was walking out the room" Mommy can we pray?" My heart melted and tears were about to come out. But I pulled it together and we prayed. As we prayed all i could do was thank God for answering my prays and helping Darren to start finding hisnlight agian. I just needed to share this joy that I am feeling inside. Thank you all for your support maybe this is what out family has needed.

From The Leaf Chronicle:

Community asked to shine a light for fallen soldier
Philip Grey, The Leaf-ChronicleSeptember 24, 2014

On the first anniversary of his soldier father's death in Afghanistan, 6 year-old Darren Baysore is asking area residents to turn their porch lights on so his dad can see he's remembered 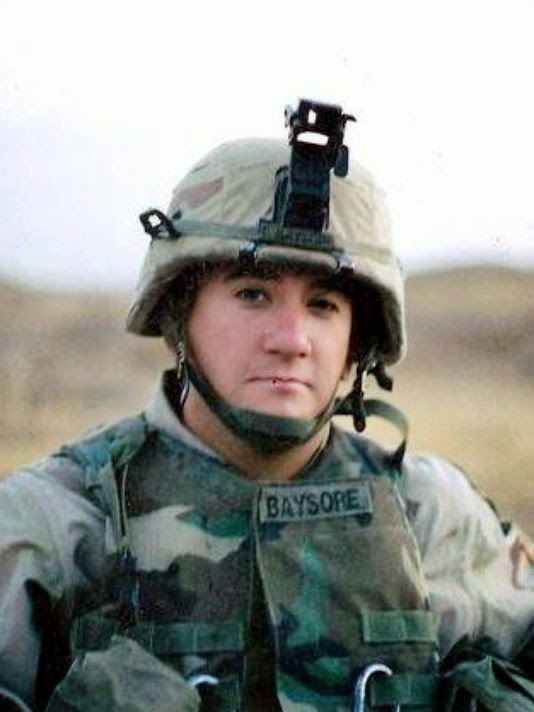 CLARKSVILLE, Tenn. – The child of a fallen Fort Campbell soldier has a request for the community, and it requires no money or extraordinary effort.


He also wants people to post the pictures of their porchlights (or if they don't have one, a candlelight) and a note saying where they're posting from to a Facebook page called "Shining Love to Daddy Baysore," https://www.facebook.com/baysoreslight.


His mother, Jamie Baysore of Clarksville, explained the request.


"Tom and Darren used to look up at the night sky all the time, and his daddy would say, 'I love you to the moon and back.' He told him that again the night before he deployed.


"When we received the news that Tom had died in Afghanistan, Jamie turned the porch light on so his father could see it from the moon. That's where he believes his dad is. He wants Dad to know his son is sending his love."...

There is more on Darren's simple request - and YOUR Mission - here.