Mr President: The buck stops with YOU 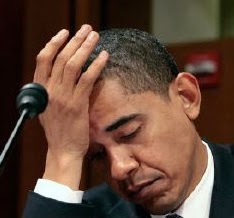 Apparently MIC was on 60 Minutes  last night for another of his prime time 'let me be  clear' monologues.  No, I did not watch it, but a headline from this morning caught my eye:


29 September 2014
President Barack Obama on Sunday said that the U.S.intelligence community had underestimated Islamic State (ISIS) strength and level of activity inside Syria, which has become “ground zero” for jihadist terrorists worldwide, while overestimating the ability of the Iraqi army to fight such militant groups. Obama’s admission that ISIS succeeded in setting up its bases in Syria and Iraq without being noticed by U.S. intelligence may embolden Republican hawks such Senators John McCain (R-Arizona) and Lindsey Graham (R-South Carolina) who have been complaining for months that the administration was being too passive in its approach to the Syrian civil war.


The president, who was interviewed on CBS 60 Minutes, spoke while additional U.S.-led airstrikes were carried out in Syria and Iraq, and at the same time that House Speaker John Boehner (R-Ohio) called for a ground war against ISIS.

Obama cited comments made by James Clapper, the director of national intelligence, to the Washington Post earlier this month. Obama said U.S.intelligence underestimated what had been taking place in Syria after Islamic militants went underground when U.S. marines defeated al-Qaeda in Iraq with help from Iraqi tribes.

“But over the past couple of years, during the chaos of the Syrian civil war, where essentially you have huge swaths of the country that are completely ungoverned, they were able to reconstitute themselves and take advantage of that chaos,” Obama said. “And so this became ground zero for jihadists around the world” (the president was referring to the defeat of al-Qaeda in Iraq in 2006-2007; the Syrian civil war erupted in early 2011)....

There is more to read here, as MIC continues his usual MO of not listening to any of his Military experts, and laying the blame for his foreign policy failures on everybody else, except where it belongs.

Email ThisBlogThis!Share to TwitterShare to FacebookShare to Pinterest
Labels: Obama and ISIS