An unexpected, wary meeting on a mountainside 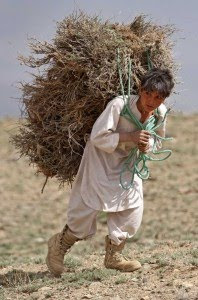 
Parwan Province, Afghanistan – The boy carrying the huge bundle of firewood looked surprised and wary when he crossed paths with American soldiers high up on a remote mountainside Saturday morning.

The boy had gathered bits of dry brush and was lugging them home on his back when an Iowa National Guard platoon walked up a nearby dirt road.

The Guard unit’s commander, Capt. Randall Stanford of Clive, stepped toward the youth and greeted him in Pashto. Other soldiers and a translator soon formed a semicircle around the boy, who was wearing what appeared to be surplus military boots.

When asked who he was, the boy timidly said that his name was Hazrat Ali, and that he was 14 years old. He glanced side to side, clearly wanting to leave as soon as possible....

To read what happened next, go here.
Posted by The Brat at 4:09 PM