The Pegasus has landed! 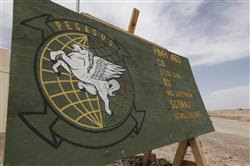 
The Pegasus has landed: HMH-463 arrives in southwestern Afghanistan

The Ugly Angels of Marine Heavy Helicopter Squadron 362 will now head home to Marine Corps Base Kaneohe Bay, Hawaii, after a successful deployment, and HMH-463 will continue in their place, providing CH-53D Sea Stallion helicopter support for troops on the ground. Sgt. Maj. Timothy C. Tackett, HMH-362’s squadron sergeant major, spoke highly about the job his squadron did while in theater.

“We couldn’t have handpicked a better team,” Tackett said. “They were simply outstanding from day one. I couldn’t be any more proud of the performance and dedication they showed here.”

Tackett also expressed his confidence in the HMH-463’s Marines and the squadron’s sergeant major, Sgt. Maj. Rene Salinas, as they face their new assignments.

“They have a great sergeant major in Sgt. Maj. Salinas,” Tackett said. “I know they will all do absolutely fine out there.”...

You KNOW there is more, here.

Email ThisBlogThis!Share to TwitterShare to FacebookShare to Pinterest
Labels: HMH-463 arrives in Afghanistan