In the years since 9/11, we have all seen unscrupulous jerks try to make money off the misuse and abuse of images and names of those who sacrificed. 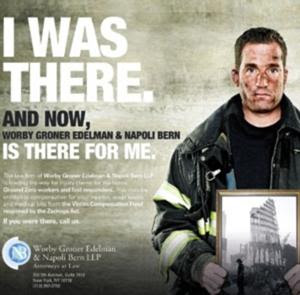 One of New York's Bravest is objecting to the use of his likeness in a poster marketing the services of a New York law firm that specializes in 9/11-related illnesses.

The ad in question features a firefighter holding a photo of the devastated World Trade Center site, accompanied by the words, "I was there. And now, Worby Groner Edelman & Napoli Bern is there for me." And therein lies the issue: the man in the ad, Robert Keiley, didn't become a firefighter until 2004.

According to the New York Post's Reuven Fenton and Jennifer Fermino, Keiley is particularly upset that the photo in the poster was manipulated from a generic promotional photo for the department--of Keiley holding his fire helmet. The law firm's ad agency, Barker/DZP, swapped a picture of the World Trade Center in place of the helmet. They then debuted the poster at a fundraiser, the World Police Fire Games Event Gala; a move Keiley thinks makes him look like a "scumbag."

"It's an insult to the Fire Department. It's an insult to all the families who lost people that day," Keiley, an ex-cop who also works part-time as a model and actor, told the Post. "It makes me look like I'm cashing in on 9/11, saying I was there even though I was never there, and that I'm sick and possibly suing, trying to get a chunk of money."...

Yes, there is more and you can find that here.

At first, I didn't understand why he would be so upset. Personal injury attorneys, although don't work for free, do advocate for the victim. But upon reading further, the lawfirm did make a big mistake. They should have done their research or at least asked someone they have represented if they would mind using their image. It was a bad decision for sure.