JOINT BASE LEWIS-McCHORD, Wash., March 29, 2011 – At age 54, Leamon Woodley, a civilian employee here, is in better physical condition than many soldiers half his age.

A trained powerlifter, Woodley holds more records than he can keep track of -- earlier this month, that number increased by two. 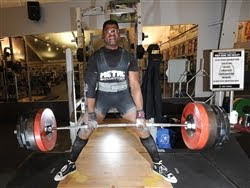 The retired Army master sergeant competed in the 2011 Washington State Powerlifting, Bench Press and Deadlift Championship in Tumwater, Wash., March 5 and 6. The 181-pound Woodley set two national records, including the squat at 640 pounds and total weight at 1,654 pounds. The total record was the combined weight of three separate events: squat, bench press and dead lift.

Woodley also was inducted into the Washington State Powerlifting Hall of Fame for his nearly two decades of participation and recognition in the sport.

Woodley's interest in powerlifting began while stationed in South Korea in 1991, when he became a certified master fitness trainer for the Army. He had just graduated from the course and attended his first powerlifting meet, where he saw a 130-pound woman dead lift 330 pounds.