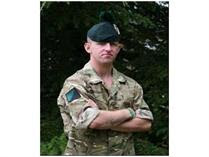 It is with sadness that the Ministry of Defence must confirm that Lance Corporal Stephen McKee, from 1st Battalion The Royal Irish Regiment, was killed in Afghanistan on 9 March 2011.

Lance Corporal McKee was killed when during an operation to disrupt insurgent activity in the northern Dashte area of Nad 'Ali district his vehicle struck an improvised explosive device.

Lance Corporal McKee was posted to B Company, where he served with distinction for 3 years before moving to the Machine Gun Platoon in D Company in 2010. He first deployed on Op HERRICK 8 in March 2008 and was quickly recognised as a fine soldier, trustworthy and courageous.

Lance Corporal McKee always had time for everyone. He was a family-man and showed enormous strength, particularly during a very difficult time last year when his two-day-old daughter passed away. Lance Corporal McKee had strong family connections with the regiment, with two brothers, a cousin and his father-in-law all serving in the First Battalion, and with another brother serving in the Second Battalion.

Lance Corporal McKee's loss is profound. It has affected this Battalion and the wider Regimental family most deeply. He leaves behind his wife Carley, his parents Heather and Bobby, his brothers Michael, Gareth and Robert, and his sisters Kelly and Rebecca, our thoughts are with them all at this sad time.

"You will always be my hero and every step I take in life, I will have my two angels looking after me. You truly are the best husband, father, son and brother anyone could ask for. Till we meet again. Love you always."

"Stephen McKee was the finest of men; he was irrepressible, he was utterly reliable and he was a fearsome warrior. As part of the Operations Company he fought the long battle to drive the enemy out of the Nad-e'Ali Canal zone and into the desert.

"And it was into the desert that Stephen and his comrades followed, in pursuit of the enemy. When he died, he was attacking the insurgent in his bases there, harassing him, capturing his weapons and destroying his explosives.

"Not only was he the finest of Irish soldiers, he was a man with great depths of resilience. I had the privilege of spending a little while with him and his wife Carley after their baby daughter passed away unexpectedly last year.

"His parents and his brothers and sisters had closed around the grieving couple. Their strength and the unshakeable of bonds of this wonderful family were truly humbling. Please God be with them all now. Faugh A Ballagh."

"The death of Lance Corporal Stephen McKee comes as a most profound loss. Rarely would you find someone as conscientious, generous, hard working and as professional as Stephen. I remember my first meeting with him on Salisbury Plain when he was commanding the opposing force on my Company exercise.

"The first thing that struck me was his disarming smile, the second that unflaggingly positive character of his. Regardless of his own discomfort or the adverse conditions crippling those around him, there would be Stephen with that bloody grin of his. He was a popular and endeared leader within the Company and whilst he was easy to like, he was a man that was even easier to respect.

"Lance Corporal McKee joined Machine Gun Platoon in early 2010 but has always been closely linked with the Regimental Bugles, Pipes and Drums. He was destined for greater things and had just completed his Machine Gun Section Commanders Course before deploying to Afghanistan at the end of January 2011.

"After rejoining the Company he pushed himself immediately to the front and that is where he continued to lead from. He was employed as a Patrol second-in-command and had already taken part in numerous air assault operations. On the day of his death he was taking part in a cordon and search of a small Kalay (village).

"He was determined to do the best he could, to stand shoulder to shoulder with his mates and to serve his country proudly. And this he did.

"Stephen gave his life doing the job he loved. He was a committed, brave and selfless leader that thought nought of himself and everything of those around him. He was a loving husband to Carley and a totemic man of the Regiment. The tragedy has deeply hit the men, not just of D Company, but across the Battalion. That grin of his will be hard to replace."

"Stephen's death is a terrible and heart-felt loss. In my time with 1 R IRISH he certainly had an impact on me. From the moment he joined my Platoon I realised that Stevie was special and I was truly inspired by the motivation he displayed in all aspects of his job....

Captain Benjamin Cox: "Brave, selfless, stoic and good craic with it - these are just some of the accolades lauded on Lance Corporal Stephen McKee by his fellow soldiers... he consistently exceeded what was asked of him and did so in good mirth. He was truly inspiring."

Warrant Officer Class 2 John Brennan said: "I could start by saying he was a rough-cut diamond and everyone would know what this means, but not with Stephen.

"He was not a rough-cut diamond or a bit of a rogue - he was genuinely a nice guy and a doting husband and as such I feel privileged to have known him."

There is so much more about this Fallen Hero, by those who know him the best, here.

May your soul be at the right hand of God.

[Also at Project Honor here]
Posted by The Brat at 4:31 PM

Email ThisBlogThis!Share to TwitterShare to FacebookShare to Pinterest
Labels: Some Gave All Lance Corporal Stephen McKee