Repatriation ceremonies to be relocated 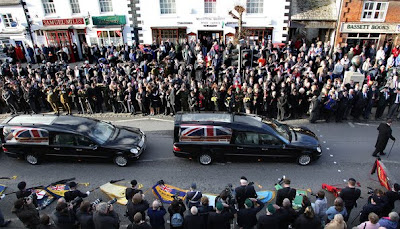 Repatriation ceremonies for those killed in operational theatres will move to RAF Brize Norton by 1 September 2011 the Defence Secretary Dr Liam Fox has announced today.

The repatriation of a serviceman by C-17 aircraft to RAF Lyneham
[Picture: Crown Copyright/MOD 2010]

The relocation of the repatriation ceremonies to RAF Brize Norton in Oxfordshire follows the decision to cease flying operations at RAF Lyneham by 30 September 2011.

Moving repatriation flights back to RAF Brize Norton will signal the end of the cortege passing through Wootton Bassett en route to the John Radcliffe Hospital in Oxford.

"I recently made a recommendation to Her Majesty The Queen, and I am very pleased today to announce that Her Majesty has agreed to confer the title 'Royal' upon the town as an enduring symbol of the nation's admiration and gratitude. The town will become 'Royal Wootton Bassett' later this year."

"I would like to thank RAF Lyneham for their excellent work in supporting the important task of repatriation ceremonies. I am certain that RAF Brize Norton will maintain the standard of solemnity, dignity and respect to our Service personnel killed on operations as shown by the personnel at RAF Lyneham.

"I would also like to record publicly my thanks to the people of Wootton Bassett who have chosen to pay their respects in a unique and special way.

"It is such spontaneous public support that captures the spirit of the British people, and I am very grateful for those who have participated; such gestures do not go unnoticed by those deployed on operations."...

Email ThisBlogThis!Share to TwitterShare to FacebookShare to Pinterest
Labels: RAF Brize Norton new base for repatriation, Royal Wootton Bassett, We will Remember Them, Wootton Bassett