“Queen of the Fleet” decommissions 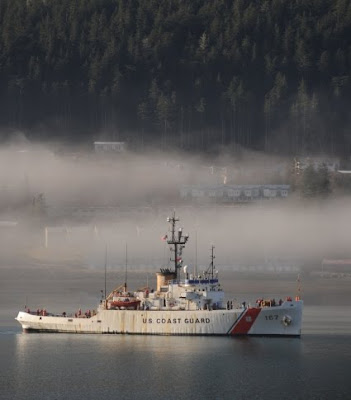 JUNEAU, Alaska – Acushnet arrives in Juneau Friday, Feb. 19, 2010 for a port visit before returning to their homeport of Ketchikan. The crew conducted 43 boardings of commercial vessels and assisted fishermen on the vessel Butterfly as it was taking on water south of Kodiak. Coast Guard photo by PA3 Walter Shinn.

The “Queen of the Fleet” is a long, proud tradition honoring the Coast Guard’s oldest ship. Four years ago, this title was given to Coast Guard Cutter Acushnet and after a long and adventurous 67 years of service, the time had come for the 213-foot cutter to be decommissioned.

Entering service in February 1944 as the U.S. Navy rescue and salvage ship USS Shackle, Acushnet was transferred to the Coast Guard in 1946. The cutter became a standard fixture along America’s coastline providing aid to mariners along the East, West and Gulf coasts. For the past 13 years Acushnet has been homeported in Ketchikan, Alaska, where it conducted fisheries law enforcement, search and rescue, environmental protection and homeland security in the Bering Sea and Gulf of Alaska.

“It has been an honor to serve as the last commanding officer aboard the Acushnet, a ship with an exceptionally long history of service to the United States that began in World War II and extended up to the present day,” said Capt. Mark Frankford....

Email ThisBlogThis!Share to TwitterShare to FacebookShare to Pinterest
Labels: Acushnet, Queen of the Fleet decommissions