NANGARHAR PROVINCE, Afghanistan, March 14, 2011 – Army Sgt. Christian Kapler is a busy man. Anywhere people walk on Forward Operating Base Torkham Gate on the Afghanistan and Pakistan border, they will see something Kapler built, repaired or improved. 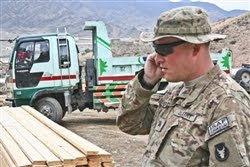 “My dad would say it’s genetics,” said Kapler, a burly, soft-spoken infantryman from Oelwein, Iowa, with Company B, 1st Battalion, 133rd Infantry Regiment, who serves as the base’s manager. “My grandfather had a little shop and built everything he had -- his house and all. I don’t know what he actually did for a job other than build things.”

Like his grandfather, Kapler said he enjoys working with his hands.

“I was always tinkering and building things when I was a kid, going to the lumber yard and getting scrap wood and building stuff,” he said. “I did handyman stuff when I was older and started going to school at a community college for architecture and contracting, but I kept getting deployed, so I never finished college. I think the unit knows building stuff is the type of thing I excel at.”...