The Royal Navy's ice patrol ship HMS Endurance is to be replaced with a Norwegian ship on a three-year loan basis. 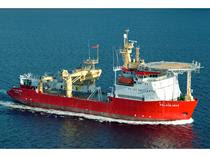 Speaking in the House of Lords this week, Lord Astor, the Parliamentary Under-Secretary of State at the Ministry of Defence, said the new ship, to be called HMS Protector, will be leased for three years while HMS Endurance's future is considered:

"The intention is to lease MV Polarbjørn, a Norwegian ice patrol ship, for an initial period of three years," Lord Astor said.

The ship's mission is to patrol and survey the Antarctic and South Atlantic, after the Portsmouth-based Endurance suffered a flood in 2008 following a maintenance error off the coast of Chile.

HMS Endurance has been docked at HM Naval Base Portsmouth ever since she was transported back to the UK on a special container ship in 2009.

MV Polarbjørn, as HMS Protector, is due to arrive in May for refitting ahead of deployment.

Lord Astor said a contract for the lease was expected to be signed soon with GC Rieber Shipping - the Government's preferred bidders.

Six ships of the Royal Navy have previously been called HMS Protector, including an Antarctic survey vessel which served from 1936 to 1970....