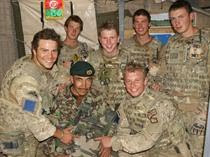 A British-trained hero of the Afghan National Army (ANA) showed the true grit and courage of the Paras who coached him when he shrugged and carried on fighting after he was recently shot.

'Honorary Para' Sergeant Rasoul Bamyani, aged 45, was patrolling alongside his Afghan colleagues and their British mentors from 2nd Battalion The Parachute Regiment (2 PARA) when he was shot by an insurgent fighter.

The bullet was stopped dead by the protective plate of Sergeant Bamyani's body armour - although the force of the impact threw him to the ground, causing him serious bruising.

Sergeant Bamyani got straight back up and carried on fighting, supporting his colleagues who continued to engage the enemy. The contact ultimately resulted in the insurgents being defeated.

A veteran of the Soviet invasion, who fought for ten years against the Red Army from 1979 to 1989, Sergeant Bamyani has more recently been mentored by D Company, 2 PARA, along with his colleagues in the 4th Tolay (Company), 3rd Brigade, 215 Corps of the ANA....

Much more on this Every Day Hero - a true Para in deed - here.