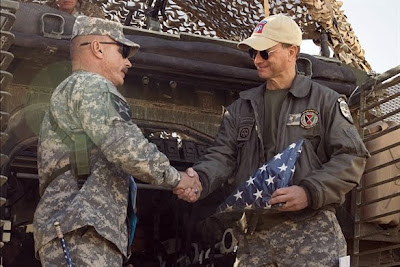 This visit is one in a long line of entertainment and celebrity visits to boost morale of servicemembers who are away from home and their loved ones during the holidays, said Col. Edward Shock, the Armed Forces Entertainment director.

That sentiment of thanking the troops during the holidays was echoed by the visitors.

"We understand and appreciate your sacrifice. We do not take you for granted," Mr. Sinise told the crowd. "We're grateful for you and your service and the sacrifice of your loved ones back home. Your families sacrifice so much, so often and we know they miss you. Thank you."

Mr. Sinise also visited a remote Army outpost near the Pakistan border where he met with Soldiers and distributed humanitarian supplies to more than 50 Afghan children.

While Mr. Sinise visited the remote outpost, other actors visited the Craig Joint Theater Hospital at Bagram Airfield to meet the staff and visit with patients.

"You all have a first-rate facility," said actor Mykelti Williamson, also known as Bubba from the "Forrest Gump" movie. "You're using equipment and techniques that we're not even seeing in the states.

"I am so grateful for their sacrifice," he continued. "I pray to God daily for the men and women who go through there."

"I think it's really good they're here supporting the troops," said Staff Sgt. Henrie Young, from the 455th Air Expeditionary Wing Safety Office before a thunderous applause from a cover of Neil Young's "Teenage Wasteland."

The Lieutenant Dan Band has traveled all over the world playing popular music and visiting servicemembers and families, including Guantanamo Bay, Cuba, the Korean Demilitarized Zone and many other remote military bases. The band name was chosen because Mr. Sinise was constantly recognized by a character he played in the movie "Forrest Gump" called Lieutenant Dan.

I would like to see Sinise honored with a civilian metal for the generosity of time, money, and talent spent on his work with the wounded, children, and our troops. He's a hero in my book.