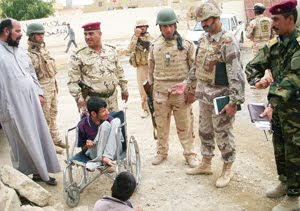 12th November, 2009
82nd Airborne Division release
CAMP KOREAN VILLAGE — American troops aren’t the only ones conducting goodwill missions here, as Iraqi troops are out in force to win the hearts and minds of the people.

The goodwill mission was planned and executed without any U.S. or Coalition involvement.

Staff Col. Abbas met with the educational director and visited every school in Rutbah. During the visits, he distributed notebooks, crayons and pencils to help the schools meet their supply shortfalls.

Abbas visited more than seven schools, interacting with local officials and residents as the Soldiers of 3-29 provided security.

In addition to school supplies, the Soldiers brought wheelchairs to help the physically disabled.

U.S. forces were conspicuously absent from the event, a sign of the successful training partnerships with American troops designed to foster self sufficiency in Iraq's Security Forces, said 1st Lt. Troy Yard, a spokesman for the 82nd Airborne Division (Advise and Assist Brigade).

"From start to finish the Iraqi Army was in the lead both tactically and logistically," he said.