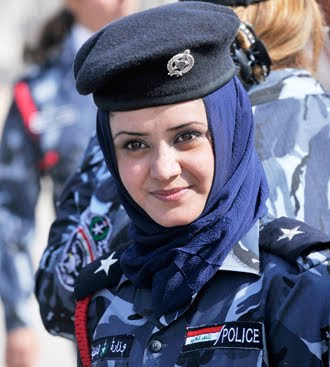 The new female officers and more than 1,000 male students culminated their training with a ceremony marking their successful completion of the rigorous nine-month training program.

This class represents the first time that females have been able to attend and graduate from the nine-month police curriculum at the BPC. As college graduates, the women learned the basic skills needed to become police officers and were held to the same standards as their male counterparts. Twenty-seven have been to law school and many are mothers who must balance responsibilities at home with their new police duties.

Danish police Maj. Nana Shriver, an advisor to the High Institute at BPC, played an instrumental role assisting the women throughout the tough course. Shriver said that these women will add tremendous value and new perspective to the Iraqi Security Forces...

COB ADDER — Women here have struggled for centuries to carve out a life of their own. Even with the advent of democracy, that struggle continues, and only attention and assistance can improve the situation.

With that in mind, U.S. Soldiers recently visited a rug factory managed and staffed entirely by women in Gharraf, a town north of Nasiriah in Dhi Qar province. The factory employs more than 100 women, all experts in the art of weaving fine rugs.

The women proudly displayed their hand-woven rugs, some of which take more than three months of daily weaving to complete.

In addition to offering the rugs in local markets, the women will sell their rugs to Coalition forces at nearby Contingency Operating Base Adder.

"I experienced first-hand how these women are striving to be more self-sufficient in their society despite so much hardship," she said.

Many of her comrades on the visit shared her sentiments and were impressed by the women.

The factory has been in business since 1994, but only recently re-started operations. Though initially disrupted by the war, the improving security situation and renewed interest in their rugs has prompted the ladies to return to their work.

As the Army's first unit to perform the Advisory and Assistance mission in Iraq, an important part of 4-1's job is providing military support to building civil capacity in three southern provinces.

Women's initiatives – a vital part of that civil capacity – are an essential ingredient for promoting stability in Iraq.

Key to this mission is the cooperation between the provincial government, the Department of State-led Provincial Reconstruction Teams and the Soldiers on the ground with Task Force Pathfinder.

Built around the core of 2nd Battalion, 29th Field Artillery Regiment, Pathfinder incorporates civilian experts, professional engineers and civil affairs units as it works hand-in-hand with the PRTs to develop projects and training programs that help the Iraqis address a wide range of concerns. (here)