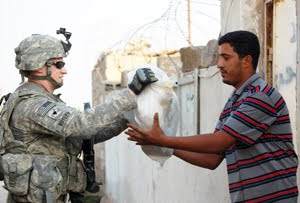 BAGHDAD — Military vehicles carrying a harvest of pre-packaged foods pulled up to the Salim Molaw Abu Hathafa Mosque in the Zaydon marketplace here, Nov. 23, just in time for Eid al-Adha.

Squadron Soldiers unloaded 100 meals as Saad Hawas Salim, whose family runs the mosque, and a few men from the marketplace, helped stack the bags on the steps of the facility.

Salim's grandfather is the head of the mosque where the meals will be handed out after services there. According to Salim, there are quite a few orphans in the area.

"There are about 300 to 500 kids with no mother or father here," said Salim. "Some of them live with their cousins and some live at a station set up by the shaykhs."

The mosque, with its graffiti covered walls topped with barbed wire, sat unobstructed in the middle of the marketplace; a safe haven for the children the meals were brought there to help.

"Tell your grandfather this is a gift from U.S. forces for those who need it and we wish them good will," said Capt. Thomas Mills, of Winfield, W.Va.

Salim, of the al-Zobaai tribe, thanked Mills and reassured him that he would keep his promise of giving the meals out after the noon day prayer.

When the troops were about to load up to leave for another mission, groups of children, making their way home from school, approached. The Soldiers dug into their pockets, and pulled out candy, gum, pencils and pens.

As the Soldiers handed out the small gifts, the children accepted the treats and moved on as if it were an everyday occurrence.

"They were the most well behaved children I have ever seen over here," said Staff Sgt. Jeremy Phillips, of Oak Hill, W.Va. "I almost wish I had more to give them." (MNF1 here)