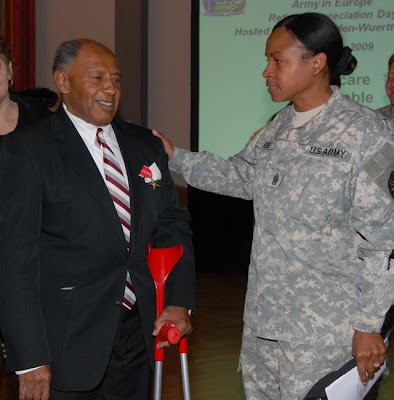 Vietnam veteran receives Bronze Star for Valor for actions in 1967

HEIDELBERG, Germany -- A Vietnam veteran was honored for his valor in combat with the presentation of a Bronze Star medal at Heidelberg's Retiree Appreciation Day on Patrick Henry Village, Oct. 17.

The 9th Infantry Division originally cut orders in August 1967 for a Bronze Star for Valor recognizing Pankey for his bravery, however, he did not receive the decoration until July 2009.

Brig. Gen. Allen W. Batschelet, USAREUR deputy chief of staff for operations, presented the award in front of a room full of retirees, family members and current Soldiers gathered at the Village Pavilion for the services available at the annual event for retirees.

"Even though it was a long time in coming, I feel like I have earned it," Pankey said. The 3/11th ACR annual historical summary reported at about 1 a.m. on June 19, 1967 the 1st and 2nd battalions of the 274th Viet Cong Regiment, reinforced by their regimental heavy weapons company and the 5th Viet Cong Division anti-aircraft weapons company, attacked 3rd Squadron's perimeter along Highway 2 near the Cambodian border.

According to the 3/11th's report, the squadron "was attacked from three sides and subjected to an intense volume of fire. Team K and Headquarters Troop, who were manning the perimeter, reacted quickly and laid down a heavy volume of suppressive fire."

"Sergeant Pankey and his fellow Soldiers were subjected to mortars, rockets, recoilless rifles, automatic weapons and small-arms fires from an estimated battalion of Viet Cong," the orders read. Exposing himself to the enemy, Pankey directed his platoon's fire and helped evacuate wounded Soldiers from the firefight.

Pankey's platoon leader and sergeant were mortally wounded during the onslaught. Realizing the situation had become critical, Pankey rallied his men and maneuvered them to strengthen a vital sector of the perimeter, the award orders said.

"Charlie was following us for 28 solid days," Pankey remembered. "All of a sudden, he started opening up with everything you could name .... He was coming in from all directions."..

There is much more to this amazing story of heroism, and you can find that here.

You most certainly did earn this medal, Staff Sgt. THANK YOU for your service.
Posted by The Brat at 3:33 AM