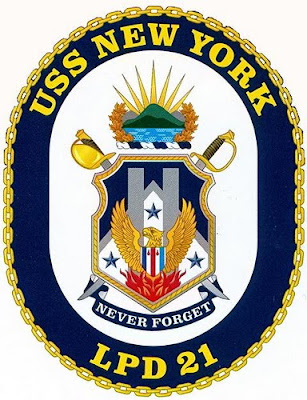 Ship's Crest Symbolism
Shield: Dark blue and gold, the colors traditionally associated with the Navy, represent the sea and excellence. The crossed swords represent the US Navy and Marine Corps. The red is for sacrifice and valor and the white recalls purity of purpose. The gray chevron and two vertical bars represent the bow of LPD 21 and The Twin Towers respectively. They are conjoined to emphasize the use of 24 tons of steel recovered from the World Trade Center, to construct the 7.5 ton bow stem of the USS New York. The phoenix rising personifies the hope and determination of this nation to rebuild and regroup to fight terrorism. The shield on the phoenix's breast honors the New York City Fire Department, New York City Police Department and the Port Authority of New York and New Jersey. The vertical red stripe is for the Fire Department, the dark blue stripe is the traditional blue for the Police Department and the light blue stripe is for thePort Authority Police Department, The Celeste is taken from the patch of the Port Authority of New York and New Jersey. The Celeste also alludes to costal waters and the port of New York. The red drops represent blood shed and the ultimate sacrifice made by the men and women of 9/11. The stars commemorate the three battle stars the USS New York Battleship earned during World War 11. The border of the shield is adapted from the New York State Seal.
The sunburst represents the crown of the Statue of Liberty. They represent the seven seas and contenents of the world and also suggest a direct connection to the littoral missions of the USS New York anywhere in the world, past and present. The mountains and lakes surrounded by the maple leaves represent the natural beauty of the State of New York.
Source, Northrop Grumman LPD 21 Christening Booklet 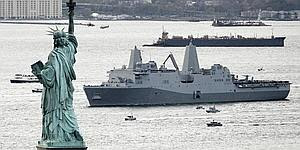 "It would be fitting if the first mission this ship would go on is to make sure that bin Laden is taken out, his terrorist organization is taken out," said Glenn Clement, a paint foreman. "He came in through the back door and knocked our towers down and the New York is coming right through the front door, and w e want them to know that."...

The fifth of its kind, the USS New York is designed for missions that include special operations against terrorists. It will carry a crew of 360 sailors and 700 combat-ready Marines to be delivered ashore by helicopters and assault craft...

Unless you are a VIP with a ticket, you won't be able to attend Saturday's commissioning of the USS New York into active Navy service.

But the 11 a.m. ceremony at Piers 86 and 88 in Manhattan, where the retired aircraft carrier Intrepid and the new amphibious assault ship are docked, will be streamed live on Newsday. com and www.navy.mil.

Secretary of State Hillary Rodham Clinton will be the keynote speaker of the event for the ship, built with 7.5 tons of steel from the World Trade Center in its bow. ...

There has been much written about the birth and the building of the USS New York. I have no profound words of my own. Although I sit thousands of miles away from the ceremonies today in New York, my heart is with a very special family attending. Diane and Ken Fairben - parents of Keith Fairben - are in attendance as USS New York begins her career. I found the official site of the USS New York, and I urge you to spend time here.

A Sacred Mission by Jim Ericson

“This new class of ships will project American power to the far corners of the Earth and support the cause of freedom well into the 21st century. From the war for independence through the war on terrorism, which we wage today, the courage and heroism of the people of New York has been an inspiration. U.S.S. New York will play an important rule in our Navy’s future and will be a fitting tribute to the people of the Empire State.”

In response, New York Governor George Pataki, who had requested the the Navy revive the name U.S.S. New York in honor of the 9/11 victims, said:

“The U.S.S. New York will ensure that all New Yorkers and the world will never forget the evil attacks of September 11, 2001, and the courage and compassion New Yorkers showed in response to terror.”

The ship’s motto is Strength forged through sacrifice. Never Forget.

The ship is not only special because of its name; it is also special because 24 tons of scrap steel from the World Trade Center was melted down in a foundry in Amite, La., to cast the ship’s bow-stem section, which is the foremost section of the hull on the water line that slices through the water. When the steel was poured into the molds on September 9, 2003, Navy Captain Kevin Wensing who was there said:

“Those big, rough steelworkers treated it with total reverence. It was a spiritual moment for everyone there.” (USSNewYork.com here)

A commenter on one of the pages I found about the USS New York said:

TO
THE OFFICER'S AND ENLISTED ON THE USS NEW YORK LPD 21
MAY YOU HAVE (FAIR WINDS AND FOLLOWING SEA)
WE NEVER FORGET (THOSE WHO WANT TO HURT US)
GOD BLESS AND KEEP YOU ALL SAVE.

And as I think of Keith, who was one of the heroes of that day, and who is MY special hero? (You can read about Keith here)

You ARE a thousand winds that blow...
the diamond glint on snow....
the sunlight on ripened grain...
the gentle autumn rain...

You ARE the swift, uplifting rush
Of quiet birds in circling flight...

I carry you with me (and yes, wearing red!) I keep in my heart and prayers all who love those who gave their lives on September 11, 2001. Today and every day. Love never dies. 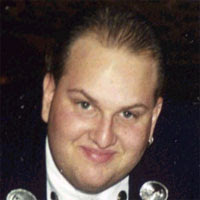