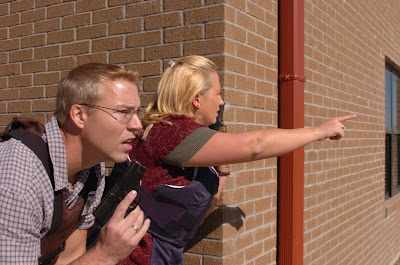 Detectives assigned to the Fort Hood Directorate of Emergency Services respond Nov. 5, to reports of a shooter barricaded in buildings adjacent to the post’s deployment readiness center. Emergency responders were quick to the scene.

FORT HOOD, Texas -- Emergency response leaders here say many lives were saved by the courageous acts of those who helped the wounded following the horrific shooting attack Nov. 5 at the post deployment readiness center.

They called the actions of Soldiers and first responders a "textbook example" of what should be done in the aftermath of a situation that was anything but ordinary.

The incident, considered the worst to occur on a U.S. military base, left 13 dead and 43 wounded before post police shot the assailant.

The violence spilled outside as Soldiers fled, some trying to break windows to escape the carnage. Witnesses say the shooter continued his rampage at an adjacent building, shooting several others before police confronted him.

Investigators are still piecing together information about the alleged assailant to determine the motive behind the shooting.

Safety officials who arrived just moments after the shooting said the number of dead and wounded was shocking. However, exercises conducted in the aftermath of incidents such as Columbine and Virginia Tech helped the response and recovery efforts.

Chuck Medley, a combat veteran who is now the director of the post's Directorate of Emergency Services, called the combined response to the incident by military and civilian responders "seamless" and "nothing short of awesome."

From the time he first heard the call "Shots fired," crackle over the radio, to the time he arrived on scene from his office, a scant few minutes had passed. With him was Fort Hood Police Chief David Ross, a former Army officer and Texas highway patrolman.

Although the gunman was down by then, reports had another shooter barricaded in the processing center, perhaps continuing to hunt victims. A massive manhunt ensued, but the claim proved to be false.

Other police units, including state troopers, were summoned to control traffic surrounding the post.

The immediate focus of Medley and Ross was to eliminate any further direct threat, secure the scene and assess the wounded to summon whatever help was needed.

On their heels was Billy Rhoads, the Fort Hood Fire Department chief, who immediately went to render aid to Kim Munley, one of two post police officers credited with stopping the shooter.

In separate interviews, all three men described the situation as "controlled chaos."

"Even with so many wounded, we were still able to take control of the scene rather quickly," Medley said. ...

I was also sent a link to a column, apparently written by another eye witness. I cannot vouch for the veracity of this account, but thought it was interesting enough to share here. Read on:

I am forwarding this without the name of the author. As he states he is a JAG officer, I will give him the benefit of my doubt. This is an eye witness accounting of what happened last week at Ft. Hood up close and very personal....

E-mail from a soldier stationed at F. Hood.

Since I don’t know when I’ll sleep (its 4 am now) I’ll write what happened (the abbreviated version…..the long one is already part of the investigation with more to come). I’ll not write about any part of the investigation that I’ve learned about since (as a witness I know more than I should since inevitably my JAG brothers and sisters are deeply involved in the investigation). Don’t assume that most of the current media accounts are very accurate. They’re not. They’ll improve with time. Only those of us who were there really know what went down. But as they collate our statements they’ll get it right.

I did my SRP last week (Soldier Readiness Processing) but you’re supposed to come back a week later to have them look at the smallpox vaccination site (it’s this big itchy growth on your shoulder). I am probably alive because I pulled a ———- and entered the wrong building first (the main SRP building). The Medical SRP building is off to the side. Realizing my mistake I left the main building and walked down the sidewalk to the medical SRP building. As I’m walking up to it the gunshots start. Slow and methodical. But continuous. Two ambulatory wounded came out. Then two soldiers dragging a third who was covered in blood. Hearing the shots but not seeing the shooter, along with a couple other soldiers I stood in the street and yelled at everyone who came running that it was clear but to “RUN!”. I kept motioning people fast. About 6-10 minutes later (the shooting continuous), two cops ran up. One male, one female. We pointed in the direction of the shots. They headed that way (the medical SRP building was about 50 meters away). Then a lot more gunfire. A couple minutes later a balding man in ACU’s came around the building carrying a pistol and holding it tactically. He started shooting at us and we all dived back to the cars behind us. I don’t think he hit the couple other guys who were there. I did see the bullet holes later in the cars. First I went behind a tire and then looked under the body of the car. I’ve been trained how to respond to gunfire…but with my own weapon. To have no weapon I don’t know how to explain what that felt like. I hadn’t run away and stayed because I had thought about the consequences or anything like that. I wasn’t thinking anything through. Please understand, there was no intention. I was just staying there because I didn’t think about running. It never occurred to me that he might shoot me. Until he started shooting in my direction and I realized I was unarmed. ...

As time passes, and the various groups continue to massage the message that the media reports on (or not!) on this terrible day, unofficial accounts such as these may take on unanticipated importance. Read the rest of this one here, and decide for yourself. (H/T Dean for this link)
Posted by The Brat at 3:33 PM