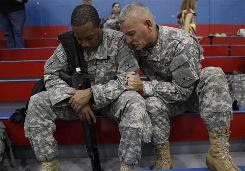 Chaplains: We are traumatized, too

By Rick Jervis, USA TODAY
FORT HOOD, Texas — They were supposed to be spending a day leading Mass, talking to soldiers about love and marriage, readying for their own deployment. Instead, the military chaplains of Fort Hood found themselves on the afternoon of Nov. 5 scrambling to the front lines of the worst shooting massacre on a military base in U.S. history.

As some of the first to arrive on the chaotic scene that day, the chaplains counseled dazed, injured soldiers, comforted witnesses and prayed over the bullet-ridden bodies of the slain.

Now they are being asked to lead the healing process. The pace and success at which they counsel the wounded and their families will determine how quickly the post returns to normalcy, said Ralph Gauer, past president of the local chapter of the Association of the United States Army, a group that counsels military families through tragedy.

"Chaplains right now represent the glue that holds an awful lot of units together," Gauer said. "But they have to come to grip(s) with it themselves. They have to try to understand what they saw themselves as they explain it others."

There are 75 chaplains at Fort Hood, most of them assigned to units, said Lt. Col. Keith Goode, deputy 3rd Corps chaplain. Ten more chaplains have been flown into Fort Hood, including an imam and a rabbi, to help with the counseling.

Untangling their pain will be challenging, said Lt. Col. Ira Houck, 56, an Episcopal priest and chaplain for the III Corps who was one of the first on the scene. "We've been traumatized, too," he said.

There is more, and you can find that here.

Our Chaplains are heroes, every one of them, every single day. Pray for THEM, too.

H/T My friend, another Janet ;)