Ft Hood: The Warning Signs Were Out There 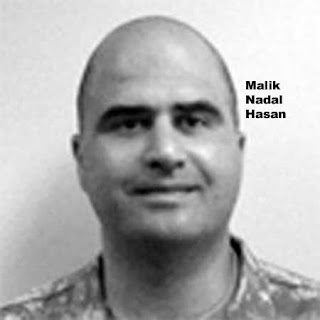 As far back as 2007 officials at Walter Reed knew that there were problems with Nidal Hasan, yet they did nothing. They chose to ignore the signs for whatever reason they had.

Two years ago, a top psychiatrist at Walter Reed Army Medical Center was so concerned about what he saw as Nidal Hasan's incompetence and reckless behavior that he put those concerns in writing. NPR has obtained a copy of the memo, the first evaluation that has surfaced from Hasan's file.

Officials at Walter Reed sent that memo to Fort Hood this year when Hasan was transferred there.

Nevertheless, commanders still assigned Hasan — accused of killing 13 people in a mass shooting at Fort Hood on Nov. 5 — to work with some of the Army's most troubled and vulnerable soldiers.

I wonder if Hasan was a Christian or Jewish would he have gotten the same easy pass that he did....

Email ThisBlogThis!Share to TwitterShare to FacebookShare to Pinterest
Labels: Ft Hood signs by Monkey in the Middle