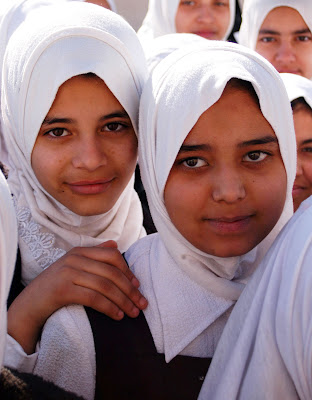 The school provides education to approximately 950 girls, who attend at various times throughout the day to accommodate the valuable education opportunity.

“This is really something big for the people. This is a fort of science,” said Muhamad Ibrihim Jassim, administrative supervisor for the Ministry of Education in Tarmiyah about the opening of the school. “This is the largest school in the area.”

The school has long been recognized by the Ministry of Education for its excellence in education, but in 2003, that excellence was threatened.

During major combat operations in 2003, the school slowly ceased to function as a fort of science and transitioned into a fort for terror.

The school, which lies up the road from a Joint Security Station, was the launching point of ambushes, improvised-explosive device attacks and sniper fire against Coalition forces and the then nascent Iraqi Security Forces.

After a cautious stability was reached in the area in 2006, Soldiers from the 1st Cavalry Division helped to rebuild the badly war-damaged school.

Approximately $300,000 dollars of Iraqi and U.S. funds were spent to rebuild and refurbish the school, which contains 18 classrooms, science labs, an administration suite and an auditorium...

Go read this one here, for the children.
Posted by The Brat at 6:24 AM