Soldiers at CJTF-101 Headquarters at Bagram look at the video teleconferencing screen as former Staff Sgt. Gary Harris is presented with the Bronze Star and Silver Star, at Fort Campbell, Ky. 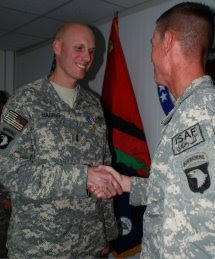 BAGRAM AIR FIELD, Afghanistan — Nearly 30 years separate the conclusion of the Vietnam war and the start of the War on Terrorism. While time, tactics and technology make today’s military very different from the one which fought in the jungles of Vietnam, a common denominator in the two conflicts has been the bravery and sacrifice of the American service member.

The Silver Star is the nation’s third-highest award for such displays of bravery and sacrifice. Chief Warrant Officer Jonathan Harris became one of the few Soldiers to receive the prestigious award on the evening of Nov. 28, but the fact that his father, former Staff Sgt. Gary Harris, was also presented at the same moment with a Silver Star made the event all the more meaningful.

Through a video teleconference during a ceremony at Combined Joint Task Force-101 headquarters, the Harris family watched from a conference room at Fort Campbell, Ky, as the younger Harris was presented the Silver Star by Maj. Gen. Jeffrey Schloesser, CJTF-101 commanding general. Meanwhile, Soldiers from CJTF-101 watched a video screen at Bagram as the elder Harris was pinned with not only the Silver Star, but also a Bronze Star he earned serving in Vietnam. Neither had been formally presented to him.

“It’s very rare that we present the Silver Star,” Schloesser explained to those in attendance at both Fort Campbell and Afghanistan. “We have a very high standard and we make sure that the few who do earn it have done so through selfless sacrifice. It’s clear that Mr. Harris did that, and it is also clear that the nation owes a debt to [former] Staff Sgt. Gary Harris. It was almost 40 years ago that he earned it, and I hope in some small way that we can pay back that debt by presenting him his award with his son’s today.”...

This really IS a special story, about two very special soldiers. Go read the rest here.

Thank you BOTH for your service!
Posted by The Brat at 12:27 AM