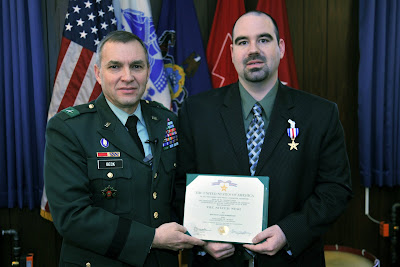 CJ sent me this one:

January 5, 2009 By CJ
Posted in Uncategorized

As always, this is a great story more people should read.

“I was just doing what I had to do,” said Harrington, who was presented the Silver Star in a ceremony held here on Dec. 27. “I think any other Soldier would have done the same thing.”
His actions were credited with saving the lives of fellow Soldiers during an incident in Iraq in September 2005.
Harrington joined the Pennsylvania National Guard to pay for college after graduating from high school in 2000.

After he completed all of his individual training, “I was kid of itching to go over there,” Harrington told his hometown newspaper, the Lancaster, Pa., Intelligencer Journal.

He got his chance in June 2005, when he was assigned to Company A, 1st Battalion, 172nd Armor as a member of a long range surveillance and sniper team.

On Sept. 19, 2005, three of Harrington’s platoon members, including his platoon leader, were killed after being attacked with an improvised explosive device (IED).

According to his award citation, Harrington immediately volunteered to be part of a reaction force to respond to the scene. Along with another platoon, he left his base and moved into a known high-threat area with little friendly presence.

As the two Humvees in his group were moving to the scene, the vehicle that he was in was struck with an IED, tearing off the front of the vehicle.

“I was pretty fortunate to be able to walk away from that,” Harrington told the Lancaster newspaper....

Go here to read the rest of CJ's post on this hero...

Thank YOU, CJ and thank YOU for your service, Spc. Jason D. Harrington.
Posted by The Brat at 12:49 AM