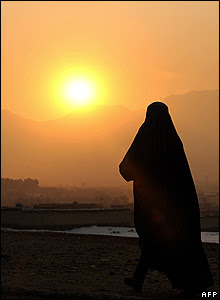 As we all wait - with bated breath? - to hear the final vote tally in Afghanistan's election day yesterday, I particularly think of the women. Yes, there are pictures all over of women going to the polls, despite Taliban bully boys throwing temper tantrums and blowing things up. Usual tactics of intimidation were the order of the day, as some Afghanis did bravely vote for their country's future.

For us in the west, election day typically gives us clearly defined choices; yes, even including the last US presidential elections. Last week came across the following piece, and it was a stark reminder of the daily struggle for women in those far off lands:

An Afghan bill allowing a husband to starve his wife if she refuses to have sex has been published in the official gazette and become law.

But critics say the amended version of the law remains highly repressive.

They accuse Mr Karzai of selling out Afghan women for the sake of conservative Shia support at next week's presidential election.

The original version obliged Shia women to have sex with their husbands every four days at a minimum, and it effectively condoned rape by removing the need for consent to sex within marriage.

There is more, and you can find that on the BBC here.

The west has a huge investment - in many ways - in seeing countries like Afghanistan leap forward into the twenty first century. However, unless and until women's voices are respected and heard; until and unless women are accepted as the equal of men in contributions into ANY society, not much will change. As long as the rule of law is allowed to keep women entrenched in the dark ages, there is no hope of real progress towards national peace.

And so it is in Afghanistan.

Email ThisBlogThis!Share to TwitterShare to FacebookShare to Pinterest
Labels: Women in the Afganistan vote