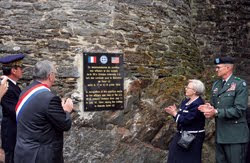 Instead, the former intelligence and operations officer from the 3rd Battalion, 134th Infantry Regiment, was once again a 26-year-old first lieutenant leading a group of people through the tangled hedgerows of Normandy in search of a special objective, just as he had 65 years earlier.

Unfortunately, much had changed over the decades. Many of the hedgerows had been removed to give the local French farmers more room to plant their crops. New houses and gardens have sprouted on what in July 1944 was a bloody, confused battlefield that would become remembered by the survivors as “Bloody Sunday.”

On this morning the sounds of battle were no longer present. Instead, the sounds of passing cars, twittering birds, mooing dairy cattle and barking dogs replaced the sounds of machineguns, mortar shells and artillery explosions.

As he walked along, Huston tried to make sense of the modernity. One of his French guides pointed toward a lane about 100 yards away. Looking at his guide, Huston said sternly with the directness of a 26-year-old infantry officer: “No, it wasn’t down there. It was right here … right here up this lane.”...

PLEASE go read the rest of this awesome story here.