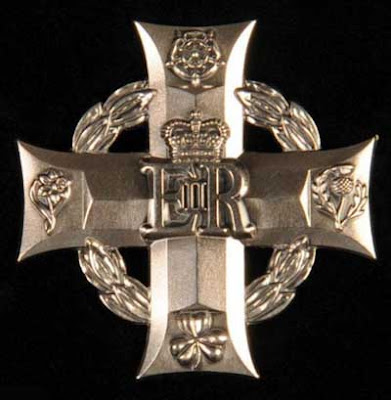 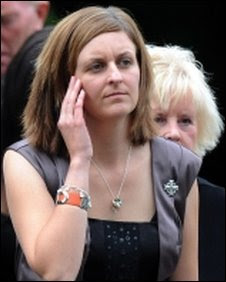 Karen Upton said she was honoured to receive the award


Long overdue recognition for our military families, who also serve.

Her Majesty The Queen has given her name to a new form of recognition for the families of British Service personnel killed while serving their country, Defence Secretary Bob Ainsworth has announced today, Wednesday 1 July 2009.

The new Elizabeth Cross and miniature are to be awarded to the relatives of Her Majesty's Forces personnel killed on active service, together with a Memorial Scroll signed by Her Majesty The Queen
[Picture: Sgt Andy Malthouse, Crown Copyright/MOD 2009]

The Elizabeth Cross will be granted to the next of kin of Armed Forces personnel killed on operations or as a result of terrorism in a mark of national recognition for their loss.

This is the first time the name of a reigning monarch has been given to a new award since the George Cross was instituted in 1940 by King George VI for acts of bravery by both civilians and the military. Prior to this, the Victoria Cross was introduced by Queen Victoria in 1856 for acts of gallantry by the Armed Forces.

Next of kin will receive the Elizabeth Cross - a sterling silver emblem in the shape of a cross over a wreath - plus a Memorial Scroll signed by The Queen which will bear the name of the person who died....

In a message to Her Armed Forces, Her Majesty The Queen said:

"This seems to me a right and proper way of showing our enduring debt to those who are killed while actively protecting what is most dear to us all. The solemn dignity which we attach to the names of those who have fallen is deeply engrained in our national character. As a people, we accord this ultimate sacrifice the highest honour and respect." (See below for Her Majesty's full statement)...

For more, go to the DoD site here.

The widow of a Nottingham soldier killed in Afghanistan has been presented with the first Elizabeth Cross at his funeral.

Warrant officer Sean Upton, 35, was killed in an explosion while on patrol in Helmand Province last month.

Karen Upton was given the medal shortly before the funeral at Catterick Garrison in North Yorkshire....

This is the first time the name of a reigning monarch has been given to a new award since the George Cross was instituted in 1940.

Mrs Upton, 32, said: "It is an absolute honour to receive the very first Elizabeth Cross in Her Majesty's name and comforting to feel the support of Queen and Country.

"Sean and I grew up together, were childhood sweethearts and soulmates. He was a loving husband and devoted father."

She added: "I will wear this Elizabeth Cross in his honour with pride and treasure it always."

WO Upton had been in the army for 19 years, serving in Northern Ireland, Iraq, Cyprus and Bosnia.

Chief of the Defence Staff Air Chief Marshal Sir Jock Stirrup said: "We as a nation owe much to servicemen like WO Upton, who gave his life fighting for our security and freedom.

"But we all also owe a great debt to his family. The presentation of this first Elizabeth Cross in the name of Her Majesty The Queen is a lasting symbol of the entire nation's gratitude and respect."...(more here on the Beeb)

Thank YOU for your service, Mrs Upton.

What a beautiful and appropriate tribute! I am so pleased to read about this new medal.