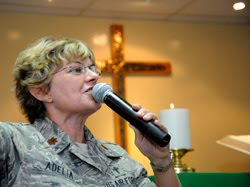 SOUTHWEST ASIA (8/3/09) -- According to the Air Force Chaplain Corps web site, chaplains provide ministry to persons of their own faith group, yet also act as guardians of the free exercise of religion.

Air Force Chaplain (Maj.) Laura Adelia of the Arizona Air National Guard, is doing just that as the 380th Air Expeditionary Wing's protestant chaplain overseeing the Church of Christ, the Contemporary, the Gospel and the Protestant Liturgical services by allowing and empowering people to exercise their religious freedom.

"As a protestant Chaplain in the Air Force, I am in charge of all the Protestant services, even the ones that I am not real familiar with because of my back ground," said Chaplain Adelia.

When she first showed up, the Gospel service had eight people in the audience.

"I led the service, even though I am not of a Gospel style tradition,"
Chaplain Adelia said. "That is what we chaplains must do at times... stretch our comfort zone."

The Gospel service is more spirited, lively with the hallelujahs, she added.

"That's not my background," she said with a spirited laugh.

She wouldn't be out of her comfort zone by herself for long, within a couple of weeks of serving as the wing's protestant chaplain, two licensed ministers asked if they could help with the service.

"The service just exploded," Chaplain Adelia said. "To have a service go from eight to 70 people in eight weeks just doesn't happen."

There were so many people the chapel's air conditioning couldn't even keep up, she added.

"This service was blessed," she said. "Instead of trying to control them, I was like you tell me what you need, because I am here to serve you. It is not about me; it is about you."

That is exactly what she did, putting the Gospel service into the hands of the people, and for this they are thankful.

"She is a woman of God," said Sergeant Harris. "She has a heart for the people of God and continues to strive towards a closer relationship with the Lord for herself."

"I am grateful that God has sent Chaplin Adelia here," he added

For Chaplain Adelia it's all about the honor of serving people and praising God.

"It is so wonderful to empower the people to share their gifts, be so well received, as well as serve the people here glorifying God in so many ways," Chaplain Adelia said. "I know I can't be everything to everybody, but it's a wonderful job to have to be able to serve." (source)

Thank you for your service, Major.