I think most know by now, what a big fan I am of the skies. From Monkey in the Middle comes this: 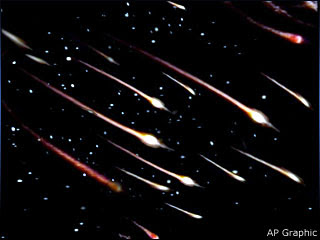 THEY ARE BACK! BIGGER AND BRIGHTER THAN EVER!!
THE PERSEIDS!!!
The Perseid meteor shower is about to peak. The show begins after sunset on Tuesday, August 11th, and continues until the sun rises on Wednesday, August 12th. A time of particular interest is 0800-0900 GMT (1-2 a.m. PDT) on the 12th. That's when Earth is expected to pass through a denser-than-usual filament of dust from Perseid parent Comet Swift-Tuttle. Forecasters are unsure what will happen, but some have speculated that meteor rates could surge as high as 200 per hour. Bright moonlight will blot out many of those Perseids, but even a fraction of 200 is a good show.

For the last 3 years I've had either dense cloud cover and/or thunderstorms. But the forcast for tonight is clear (keeping my fingers crossed). So I hope to have good "seeing".

You can find out more about the Perseids at Space Weather or at NASA.

Enjoy the show tonight. It is suppose to be the best one ever!
You might also like...

Go over there, and check out the "You might also like..." related posts here.
Posted by The Brat at 1:40 PM

Email ThisBlogThis!Share to TwitterShare to FacebookShare to Pinterest
Labels: Look Up way up part 2, Monkey in the Middle, Perseids

I'm having the best Perseids in years. Totally clear skies, and some jerk knocked down an electric pole. So no light pollution until tomorrow (Thank G-d for laptops, and battery power).