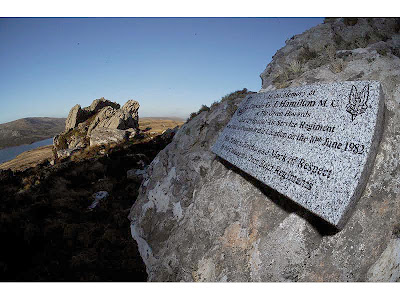 "It has been a tremendous privilege to be able to play a part in honouring Captain John Hamilton. I'm very pleased with how the plaque looks and hope it will serve as a fitting tribute to John's bravery for years to come."

Captain Hamilton served in Cyprus, Belize and South Armagh before deploying to the South Atlantic in 1982.

He survived two helicopter crashes before leading the advance elements that captured Argentine positions in Grytviken, which resulted in the enemy's surrender in South Georgia.

Ten days later, he led his troop on the successful and brilliantly executed raid on Pebble Island in the Falklands.

For his bravery behind enemy lines on West Falkland in 1982, and for his preceding actions, Captain Hamilton was awarded the Military Cross.

Captain Hamilton is buried in a cemetery otherwise almost exclusively reserved for residents of Port Howard. His grave is one of 26 inside the cemetery, bordered by a white fence, on a remote hillside, beside a bay, about a mile from the settlement.

The residents of Port Howard hold Captain Hamilton in high esteem and inside a small museum filled with artefacts of the 1982 conflict, including weapons, pilot seats (from downed aircraft) and parachutes, is the webbing worn by Captain Hamilton when he died. (source: MoD here)

I found the following about the Falkand Islands war:

On the 10th of June Hamilton and his four man patrol were using a well established OP near Port Howard when they were surrounded and out numbered by Argentine forces from the 1st Section 601 Combat Aviation Battalion. Two SAS men managed to get away but Hamilton and his signaler, Sergeant Fosenka, were pinned down. Hamilton was hit in the back by enemy fire and told Fosenka to get out while he covered him. " You carry on, I'll cover your back." Moments later Hamilton was killed. Sergeant Fosenka was later captured when he ran out of ammunition. Fosenka was not badly treated by the Argentines and Hamilton was buried with full military honors by the Argentines. The senior Argentine officer praised the heroism of the SAS officer. Hamilton was posthumously awarded the Military Cross. Some think he should have been given a VC. But because no British Officer was present during this action (apart from Hamilton himself ) no VC was awarded...

That whole entry on the Falklands War is a MUST read. Go here now, and marvel at the heroism.

I WAS PROUD TO SERVE UNDER CAPTAIN JOHN HAMILTON.. AFFECTIONATELY KNOWN AS 'HAMI'.. HE WAS MY PLATOON COMMANDER, 6 PLATOON B COMPANY. 1ST BATTALION THE GREEN HOWARDS. I WAS WITH HIM IN CHESTER. GERMANY. SOUTH ARMAGH.CYPRUS. HE WAS AN HONOURABLE MAN DEDICATED TO THE JOB.. I THOUGHT A LOT ABOUT HIM AND ADMIRED HIS LEADERSHIP.. I THOUGHT I WAS A GOOD SOLDIER.. BUT HE WAS FAR GREATER. EVERY YEAR I ALWAYS REMEMBER HIM WITH FONDNESS & RESPECT.. I CONSIDER MYSELF PRIVILIDGED TO HAVE KNOWN HIM WELL..(HE EVEN HAD A FEW OF THE LADS TO HIS WEDDING..ALBEIT TO SERVE THE DRINKS TO THE TOP BRASS.. TO VICKY IN BERLIN.. THAT WAS '77 OR '78). I COULD GO ON & ON ABOUT HIM.. IT WAS AN HONOUR TO KNOW YOU SIR AND I FOR ONE SHALL NEVER FORGET YOU NOR THE ULTIMATE SACRIFICE YOU MADE, MAY GOD BLESS YOU & MAYBE ONE DAY WE SHALL MEET AGAIN. DEN MORLEY.

What a very brave soldier.
I believe there is a memorial to him in Yorkshire, does anyone have a location or photo.
BM

Miss you boss! Thanks for new
years eve '77 sir, was worth it!
Arnie.

Sir,I trained in warminster with you approx. 1978/79 and I could never catch you and your golden Labrador running up Battlesbury hill. You were an inspiration then and was proud to have been your signaller them days albeit with the larkspur a41 and latterly the clansman range. Rest in Peace Sir
Winny