You all know by now that combat medics have a special place in my heart. 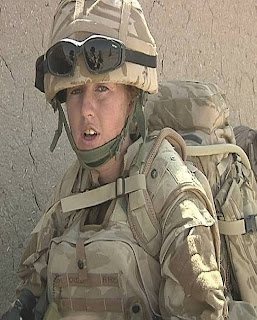 Standing just five feet tall, Private Kerry Smith is one of the smallest soldiers in the British Army, but the challenges she has faced over the last three weeks have been enormous.

24-year-old combat medic Kerry has been at the very heart of Operation Panchai Palang or Panther’s Claw, the British military operation to clear one of the last remaining Taliban strongholds in Helmand Province.

In sweltering temperatures often topping 50 degrees, Kerry accompanied soldiers from The 2nd Battalion The Mercian Regiment into fierce fighting through a rabbit warren of mud compounds and across rugged terrain, as they tackled Taliban fighters at every turn.

Despite her small stature, Pte Smith has been in the thick of it, holding her own with the men of 2 Mercian, who’ve been involved in some of the toughest fighting yet seen in Afghanistan.

“The first few days of Operation Panchai Palang were the hardest. We were coming under fire all day and were suffering lots of casualties from IEDs and RPGs. It was certainly very hard work.”...

“To be honest one of the most difficult things for me has been carrying all the kit; it’s so heavy! My pack weighs about 20kg and then I have my body armour and weapon to carry too. All together it’s almost as big as me,” she said laughing.

Treating her comrades has proved challenging for Kerry, but they have not been her only patients. Whilst on patrol recently Kerry had her first experience of treating a local Afghan female from a compound they’d just liberated from insurgents....

I found this story at Helmand Blog, which is the place for British news. It is now on my "fave" list, and I suggest you bookmark it, too.

Go here - NOW - and get to know the pint sized dynamo Private Kerry Smith. She really IS a hero, every day.

Thank YOU for your service, Private Smith!
Posted by The Brat at 12:44 AM

Tim here,,well done kerry for all your hard work. Can't say how proud I am of you..keep intouch,,,and well done to everyone.be safe....