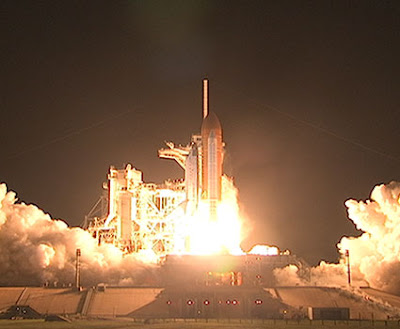 Image above: Space shuttle Discovery lifts off into the night sky on a mission to the International Space Station. Launch was on-time at 11:59 p.m. EDT. Photo credit: NASA TV

With seven astronauts and a host of experiments and equipment on board, space shuttle Discovery completed a flawless ascent into orbit Friday night to begin a two-day chase of the International Space Station. With Commander Rick "C.J. " Sturckow at the controls, the shuttle lifted off on-time at 11:59 p.m. EDT from NASA's Kennedy Space Center in Florida. The crew will rendezvous and dock with the station Sunday and the crew will begin transferring equipment to the outpost during the 13-day mission.

After flying up on Discovery, Nicole Stott will trade places with station resident Tim Kopra, who went into space last month aboard Endeavour. Equipment and science racks for the orbiting laboratory are riding inside the Leonardo cargo module, which is secured tightly inside Discovery's payload bay. The module will be lifted out of Discovery and locked onto the station so the crew can transfer the gear efficiently. The treadmill named for comedian Stephen Colbert also is aboard Discovery and destined for the station.

Discovery Readies for Station Resupply Flight
Space shuttle Discovery will carry the Leonardo supply module to the International Space Station during STS-128, along with a new crew member for the station, Nicole Stott.

Stott will take the place of Tim Kopra, who moved into the station during STS-127. Pilot Kevin Ford and Mission Specialists Patrick Forrester, Jose Hernandez, John "Danny" Olivas and Sweden's Christer Fuglesang round out the crew.

All info from NASA here.

Email ThisBlogThis!Share to TwitterShare to FacebookShare to Pinterest
Labels: Discovery STS-128 is launched