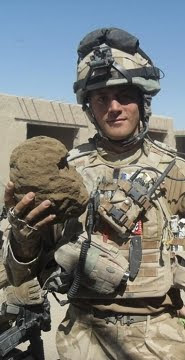 British troops seized 1.5 tons of cannabis resin during a three-day assault on an insurgent hotspot in Afghanistan. Hundreds of Black Watch soldiers surged into Lakari in southern Helmand Province under cover of darkness on a mission to clear a bazaar of drugs and ammunition. Two platoons engaged in battles with the insurgents, allowing another group to search the bazaar, where their finds included a block of cannabis the size of a football and components for making bombs.

Lieutenant Colonel Stephen Cartwright, The Black Watch commanding officer, said the operation’s impact would be felt throughout the area. “This was a key insurgent hotspot in southern Afghanistan and we have driven a wedge between the legitimate economic hub and the insurgent bomb facilitators,” he said....

From one of my favourite blogs, Helmand Blog - Afghanistan. Go read the rest here.
Posted by The Brat at 3:33 AM