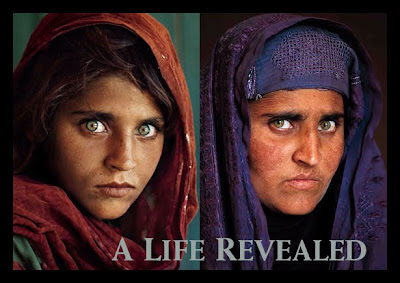 On the heels of my previous post, I have been following the debate over at Blackfive. where Wazhma Frogh asks:

Has the world now changed its mind about Afghan women? Is it ready to let them once again be killed and tortured by militants?

Today, Grim of B5 gave a link to a story at National Geographic, published in 2002, about the woman who became world famous as "Afghan Girl."

This is the story of Sharbat Gula:

Her eyes have captivated the world since she appeared on our cover in 1985. Now we can tell her story.

The photographer remembers the moment too. The light was soft. The refugee camp in Pakistan was a sea of tents. Inside the school tent he noticed her first. Sensing her shyness, he approached her last. She told him he could take her picture. "I didn't think the photograph of the girl would be different from anything else I shot that day," he recalls of that morning in 1984 spent documenting the ordeal of Afghanistan's refugees.

The portrait by Steve McCurry turned out to be one of those images that sears the heart, and in June 1985 it ran on the cover of this magazine. Her eyes are sea green. They are haunted and haunting, and in them you can read the tragedy of a land drained by war. She became known around National Geographic as the "Afghan girl," and for 17 years no one knew her name.

In January a team from National Geographic Television & Film's EXPLORER brought McCurry to Pakistan to search for the girl with green eyes. ...

What follows that intro is a retelling of how they found Sharbat, and what they found when they met her all these years later. Further into the piece, the writer says:

Names have power, so let us speak of hers. Her name is Sharbat Gula, and she is Pashtun, that most warlike of Afghan tribes. It is said of the Pashtun that they are only at peace when they are at war, and her eyes—then and now—burn with ferocity. She is 28, perhaps 29, or even 30. No one, not even she, knows for sure. Stories shift like sand in a place where no records exist....

No records may exist, but what does exist is a married woman who now has daughters of her own:

She cares for her children; they are the center of her life. Robina is 13. Zahida is three. Alia, the baby, is one. A fourth daughter died in infancy....

She can write her name, but cannot read. She harbors the hope of education for her children. "I want my daughters to have skills," she said. "I wanted to finish school but could not. I was sorry when I had to leave."

Education, it is said, is the light in the eye. There is no such light for her. It is possibly too late for her 13-year-old daughter as well, Sharbat Gula said. The two younger daughters still have a chance....

This is an amazing article, and I wish to the heavens that BHO would have someone thrust this at him, remind him that if not for a fluke of geography, HIS daughters, and yes, OUR daughters, could have been born into a situation - a country - like this.

If I could, I would make this Global war we are in so personal for those fat cat politicians in the western world, that they would forget all their political gamesmanship and give Wazhma's family a chance at a decent future. Women such as these are not just props to gain political brownie points. They have names, they have hopes for their childrens' futures. If I could, I would insist that every "decision-maker" charged with ensuring a safer world for these women and girls, (and by extension our own girls) would have to look at pictures like this every single day, until they rediscovered (discovered?) a moral compass.

To women like Sharbat this global war is personal, every day of her life. To young girls like Robina, Zahida, and Alia, the decisions made in far off lands by wilfully ignorant politicians, ARE personal. Their lives, their futures, depend on somebody, SOMEWHERE having the moral integrity to answer questions such as Wazhma asks with:

These women, and millions of other unknown women are waiting for you, Mr. Obama. What is it going to take?

[Bratnote: I got so carried away, I forgot to give the link to the National Geographic article. You'll find this MUST READ here. Go - NOW - and read it all]

Amazing story! If our "first lady" isn't interested enough to be involved in the Afghan womans plight, why should her husband even care? It seems those who shout equality the loudest are the ones turning a dead ear on the lack there of. Sickening!