A colossal new ring has been identified around Saturn.

The dusty hoop lies some 13 million km (eight million miles) from the planet, about 50 times more distant than the other rings and in a different plane.

Scientists tell the journal Nature that the tenuous ring is probably made up of debris kicked off Saturn's moon Phoebe by small impacts.

They think this dust then migrates towards the planet where it is picked up by another Saturnian moon, Iapetus. 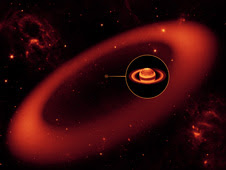 This artist's conception shows a nearly invisible ring around Saturn — the largest of the giant planet's many rings. It was discovered by NASA's Spitzer Space Telescope. Image credit: NASA/JPL-Caltech/Keck

PASADENA, Calif. -- NASA's Spitzer Space Telescope has discovered an enormous ring around Saturn -- by far the largest of the giant planet's many rings.

The new belt lies at the far reaches of the Saturnian system, with an orbit tilted 27 degrees from the main ring plane. The bulk of its material starts about six million kilometers (3.7 million miles) away from the planet and extends outward roughly another 12 million kilometers (7.4 million miles). One of Saturn's farthest moons, Phoebe, circles within the newfound ring, and is likely the source of its material.

Saturn's newest halo is thick, too -- its vertical height is about 20 times the diameter of the planet. It would take about one billion Earths stacked together to fill the ring.