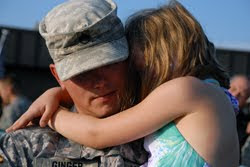 SPRINGFIELD (10/28/09) - Tears of sadness turned to tears of joy as thousands of Illinois families hugged their loved one for the first time since their Soldier was deployed in support of Operation Enduring Freedom.

After more than a year away from their friends and family, the Soldiers from the 33rd Infantry Brigade Combat Team of the Illinois Army National Guard are home. The overseas deployment of nearly 3,000 Guardsmen from 30 units across the state was the largest in state history since World War II.

The 33rd IBCT was mobilized during the summer 2008 as Task Force Phoenix VIII. Their primary mission was to train and mentor Afghan National Army and Afghan National Police forces. The Soldiers were mobilized to assist the emerging government of Afghanistan as the country struggles to recover from nearly 30 years of conflict.

The first group of Soldiers returned home on June 1 and the last welcome home ceremony was on Sept. 30. ...

You can read more of this story - my favourite kind of troop stories - here.