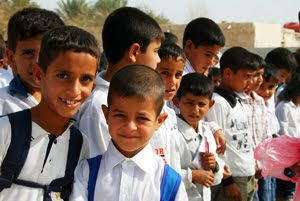 Students of the Twin Schools wait for the official opening of the schools in Taji, Iraq, Oct. 12. The Twin Schools will provide education to more than 1,200 children. Photo by Pfc. Adam Halleck, 1st Cavalry Division.

Known as the “Twin Schools” to American Soldiers, the facilities can now provide the more than 1,200 students of the area with the high-quality education they deserve.

In the past two years, this project experienced many hurdles and it wasn't until the Soldiers of the 1st Battalion, 82nd Field Artillery Regiment, 1st Brigade Combat Team, 1st Cavalry Division assumed the project that the schools had any hope of being open for the new school year.

When the U.S. troops arrived in the Taji area in mid-August, the battalion made civil capacity and essential services missions a main priority. By focusing on things that better the lives of a large majority of the local population, the American Soldiers here feel they can leave a lasting impact in their area of operations.

"The projects we fund are geared at benefiting a large group of people," said Whitewater, Wis., native, Staff Sgt. Nicholas Lien, the civil capacity and essential services officer. "The Twin Schools will benefit the over 1,200 children, their families, and most importantly, the future of Iraq."

As the sun shone bright in the small village, hundreds of children, local leaders and U.S. Soldiers stood to celebrate this historic day. In the background stood the schools with classrooms full of desks and chalkboards, staffed with faculty, ready to offer the children of this village and surrounding areas a proper education.

When he walked to the podium to give his speech, Ozark, Ala., native, Lt. Col. Eric Schwegler, beamed with pride. As the battalion commander, Schwegler has played a large role in cultivating the progress of the Twin Schools project. Understanding that the children of Iraq possess the hope for a stable future in Iraq, Schwegler and Lien relentlessly ensured that the schools would open for the upcoming school year.

"Lt. Col. Schwegler let it be known that the Twin Schools were a top priority," explained Lien, who oversaw the project for the battalion. "We stayed in contact with the contractors daily and made bi-weekly visits to the site to ensure that the school opened in time."

Thousands of man hours, nearly one million dollars, and two years later, the schools are finished. After all of the hard work by so many people, the grand opening ceremony held such great meaning to all of the children, local leaders, and U.S. troops.

"The children standing here are the future doctors, engineers, and leaders of Iraq," said Schwegler during his ceremony speech. "This project is a testament to the Government of Iraq, local leaders, and [U.S. forces], in our shared vision for the future of Iraq."

And that surely IS a B*N*S*N story! Brought to you from the MNF-Iraq here (and YES! We do still have boots on the ground there. Just sayin'!)