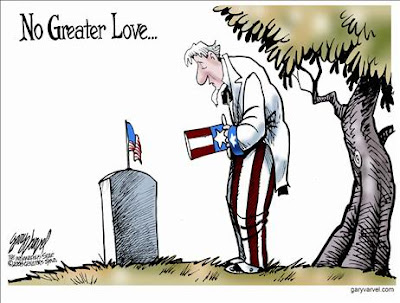 That title - and this cartoon - comes from Yankeemom:

When I hear this coming from one of our Troops, I just want to scream until I’m hoarse.

(I do a lot of screaming lately in regard to our Troops but usually just in my head, for which my husband is very thankful.)

The quote above comes from one of the Bravo Troop 361 Cavalry that lost 8 members this past weekend. They not only lost their brothers-in-arms but all their stuff as well. Every damn piece of it.

One of the best supporters our Troops have, Tankerbabe, has a post up on how you can help. She’s busy getting this together:

She has a list of things they need and all the details.

Some Soldier’s Mom (another terrific Mil-Mom and troop supporter) sent out this email:

As you all know, this past weekend, two American Combat Outposts were overrun in Afghanistan and 6 American soldiers were killed and many wounded. What many people do not know is that the soldiers who are still there (but pulled back to a Forward Operating Base) lost everything but the clothes on their backs.
This from a friend of mine at the American Legion:...

Go over HERE and read the rest of what Yankeemom has on this ongoing project. Our troops deserve nothing less than us all pulling together here on the home front.

Email ThisBlogThis!Share to TwitterShare to FacebookShare to Pinterest
Labels: Yankeemom on the Nuristan troops