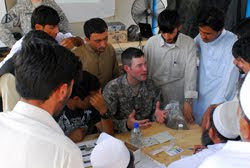 WASHINGTON (10/6/09) - The National Guard’s Agribusiness Development Teams are promoting sustainable farming practices in Afghanistan and are an innovative way for Guardmembers to use civilian-acquired skills in the region, a Guard official said today.

The teams, which started out with one team from Missouri, have evolved to roughly a dozen dispersed throughout Afghanistan, Army Col. Marty Leppert told an audience here at the annual convention of the Association of the United States Army. Leppert oversees the program for the director of the Army National Guard.

“These guys have just done incredible work in the last two-and-a-half years,” Leppert said. They have stimulated Afghan agriculture, he said.

For the teams, that means engaging with local farmers and helping them to get past many of their challenges, such as water and infrastructure issues.

The big focus has been on education and building capability, he said. But the number one issue is water. ...

Go read the rest of this B*N*S*N here.