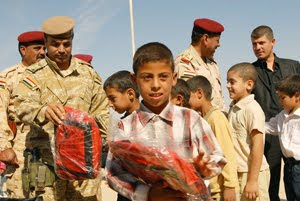 Children receive backpacks from Iraqi Army Soldiers during a “Junior Hero Program” supply delivery to their school in Arab Koy, Kirkuk province, Oct. 20. The children also recited a pledge to become “Junior Heroes” in their community and respect the Iraqi Security Forces who work to protect them. Photo by Pfc. Justin Naylor, 1st Cavalry Division.

Kids get to know their Iraqi Security Forces

KIRKUK — "I like to see them in my village, they make me feel safe," said Huda Akhmed Hussan, a 13-year-old sixth-grader here, about the Iraqi Army Soldiers he sees every day.

In addition safeguarding residents, the 12th IA Soldiers here are also trying to build trust and respect with the villagers they work so hard to protect.

This was one primary focus behind the “Junior Hero Program” in Arab Koy, Oct. 20, when IA Soldiers distributed backpacks and school supplies provided by the 2nd Brigade Combat Team, 1st Cavalry Division.

"The Junior Hero Program helps introduce them [children] to the Iraqi Army and Iraqi Police; it gives them a positive image of them at a young age," said Cpl. Adam DeArmitt, a Bellwood, Pa., native attached to the 4th Squadron, 9th Cavalry Regiment, 2nd BCT.

This helps the children not see members of the Iraqi Security Forces as just another guy with a gun, but as someone who is here to help them, he explained.

"They are doing very well," said Huda about the IA. "I have two brothers in the IA, and I am very proud of them."

Although the distribution of the backpacks was handled by the IA, U.S. Soldiers were there as well.

"I think it is good for the kids to see us working together," said Thaer Abdu Saheb, a junior IA Soldier. "For many of the kids, this was the first time seeing the IA together with the Americans."

According to Saheb, programs like this help improve the relationship between the IA and local communities, and encourage the children to follow the positive example set by the ISF.

"I think they will see this as a good thing and maybe one day want to join the IA, or even go further and become an engineer or a doctor," he said.

During the event, the children took a pledge to be loyal to their families and country; be obedient to their parents and treat them with respect; treat teachers and people in their community with respect; honor the Iraqi Soldiers and Iraqi Policemen and report crimes to them; and to be a Junior Hero of Iraq. (MNF-Iraq here)