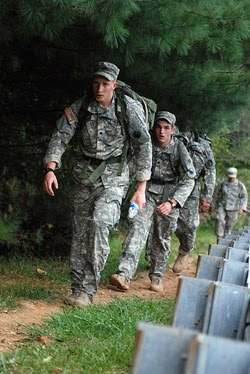 The march began at 7:30 a.m., and took the 23 Virginians around Lake Audubon three times. The Soldiers marched anywhere from 10-30 kilometers based on their age group or the badge they were competing for, Gold, Silver or Bronze.

With a 25-pound rucksack on their backs and combat boots on their feet, many Soldiers felt the pain of the long distance walk/run.

The Soldiers of the 116th prepared for the competition beginning in June during their annual training at Fort Pickett, said Hayman. To make it to the road march, the Soldiers first had to complete several track and field events, including a 3-5 kilometer run, a shot-put toss, long or high jump and a 1,000-meter swim. The Soldiers were also required to fire with a nine-millimeter pistol at a 25-meter target.

The German Armed Forces Command of the United States and Canada sent several German Soldiers to Fort Pickett to oversee the Soldiers as they completed the prerequisite tasks to earn the badge....(read more here)