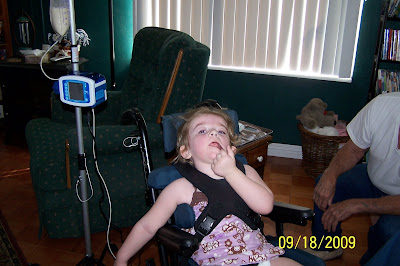 The latest from Rob. Not much for me to add except that I get to see Peanut fairly regularly and she is a sweet child, almost always smiling and always happy to see me even though she doesn't know me from Adam. Rob and Kat are marvelous parents and Antonia couldn't be in a better place, their love for her is so very obvious. It's a huge job they've taken on and there's no end in sight so they still need our prayers.

Thank you all and God Bless,
Don

Got a few minutes in between meetings, and wanted to send you an update on Peanut (Antonia). She's been with us for about 3 weeks now, and things are going really well, all things considered. We're getting used to being a family again. Things are very different than when she was with us before, and has resulted in some major schedule adjustments and lifestyle changes. She requires pretty intensive care, getting food (liquid) and getting medications through her ˜G' tube at 0500, 0900, 1100, 1300, 1700, 2100, 2300hrs, and breathing treatments every 4-6 hours via a nebulizer.

She was a very strong willed child when we had her before, and I really think it has benefited her in not just surviving all this, but making the advancements that she has. Chalk it up to her joint Scottish/Greek heritage!! One thing she loves is for us to put her on some blankets on the living room floor so she can roll around and stretch. She is now pulling her knees up under her as if she wants to crawl, but she doesn't know what to do with her arms yet. She has fun, laughs & giggles, then gets frustrated because I believe she can't do what she ˜wants" to do (we really think that she has a lot of memories of her past. I mean, she remembers us, my older daughter, the house and dogs & cat, and some things she used to do). Then she repeats the process. She spends her time in her wheelchair, in her crib, or on the floor with us.

She also always gets ˜lap" time with us several times a day, and gets about a million kisses from Katrina and myself. It is such a joy & blessing to be able to hold her, rock with her, watch football again with her, kiss her, and all the other stuff a daddy & mommy does with their child. And she loves it! This is an amazing little girl. When she wakes up, she usually wakes up with a smile, when she sees us, she'll smile, and just being with us makes her smile. Sounds corny, but its true. And it just makes our day every time we get a smile, or she reaches for us. If this is how we feel when we are with this child who was alive, died, then was restored to life, and has been restored to us, it's got a be a little glimpse of what our Heavenly Father feels for us! Everyday is a new lesson and experience in God's love!

We have not had her out of our presence since we got her back! Until we get her enrolled in school for special needs kids, I have to take her to work with me each day. And she's a trooper and just rolls with things. And yes, it does sound too good to be true, and I don't mean it's utopian - she has her times when she just is grumpy or fussy, or is just in a bad mood. It lasts for a little while and she's back to her smiling self again. She was coming down with a cold when we picked her up, and it got pretty nasty and spread to us, but she is starting to get over it now. Fortunately, her pediatrician said that we managed to avoid her coming down with an infection or pneumonia. She is susceptible to these due to the damage to her lungs.

We're in the process like I said earlier in getting things going for her to go to school here. Because we're a rural state, she will have access to the different types of therapy (speech, occupational, and physical) and other types of rehab treatments that are run through the schools here. She'll go to school for 3 hours a day, then come home. We're still trying to figure out the logistics. Plus, we're working on getting medications transferred, as well as her Medicaid coverage- which are challenging to say the least in dealing with the 2 states. At times it feels like 2 different countries rather than 2 neighboring states we're having to pay cash for a number of them as California Medicaid will NOT cover them but in the meantime, things are going, and God is always good!